Breaking news about a new major player in the United States cider industry: an organization called CINA, the Cider Institute of North America, is emerging. Although CINA is a new institution, the expert names behind the operation will be welcome and familiar to cider makers coast-to-coast, including chairman Nick Gunn, co-owner of Wandering Aengus Ciderworks.

I went to one of the founding members of CINA, Drew Zimmerman, to get the scoop. 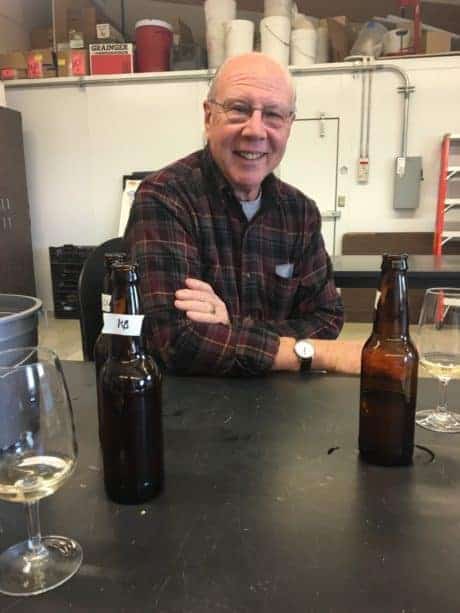 Drew Zimmerman is believed to be Washington state’s second-ever maker of traditional cider. When asked about being known as such, Drew hems and haws a bit. “Maybe the third,” he considers during a recent interview at Washington State University’s Northwestern Research and Extension Center. These days Drew is attending steering committee meetings in the development of CINA, a new school for expert instruction on cider making, which will offer courses across the United States and be linked with major educational institutions.

Drew got his start by teaching himself and reading books such as the well-known 1980 title, Cider-Making, Using & Enjoying Sweet & Hard Cider by Proulx & Nichols. Around 2000, Drew joined the Northwest Cider Society, a group of local Washington and Oregon people that met to educate themselves on cider and pursue the hobby. Another member of the group, Roger Mansfield, one of the early Oregon cider makers, was the first to take Peter Mitchell’s course in the UK in preparation for starting his commercial cider production.

I am learning all of this from Drew during a bottling session at the research station, set among the acres of research orchards and farmland, and I follow him as he talks and moves constantly. Drew is at the Research Station regularly to help ferment the juice of the program’s cider apple crop and also to support Peter Mitchell’s cider making courses held throughout the region. 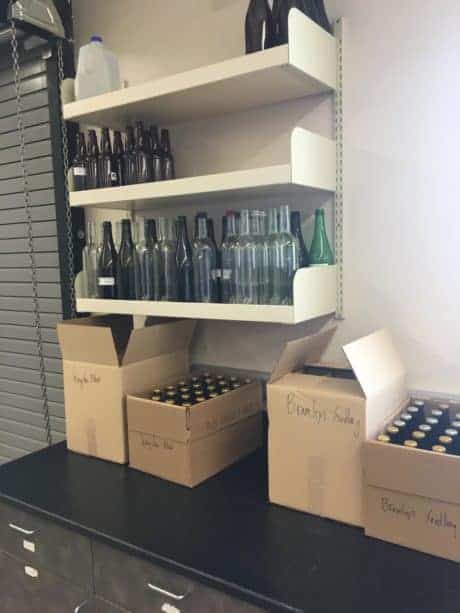 Standing in rays of natural light filtering in through the lab windows, Drew pulls samples from cardboard boxes marked with black Sharpies: Cimitière, Mott’s Pink, Bramley’s Seedling and Kingston Black. While working over his bottles he is constantly teaching about cider in a manner that is so graceful and natural that a rookie cider maker could be fooled into thinking they already know it all. But with Drew, it’s better to listen carefully and take notes because he is an encyclopedia of cider knowledge, “With cider, it’s all about the blending and the apples. That’s why it’s so important we get the cider apple varieties grown here in the States.”

In May 2003 Drew finally visited the UK himself to be trained by Peter Mitchell. When he arrived, he was somewhat surprised to find a rather distracted instructor and uprooted school. Pershore College, where the cider making courses were held, was closing down to become an Institute for Animal Husbandry. It turned out, Drew would be Peter’s last student. What could have been a disappointing session turned into the start of a wonderful relationship.

Peter, apologetic for the chaotic scene of moving boxes and changing curricula, spent extra time with Drew, touring local cideries and answering Drew’s unending list of questions on cider production. The two got to discussing the United States and Drew’s interest in getting the cider culture going. A very short time later, in fall 2003, they started the Cider & Perry Production Principles & Practice (P&P) course at the WSU research station in Mount Vernon. 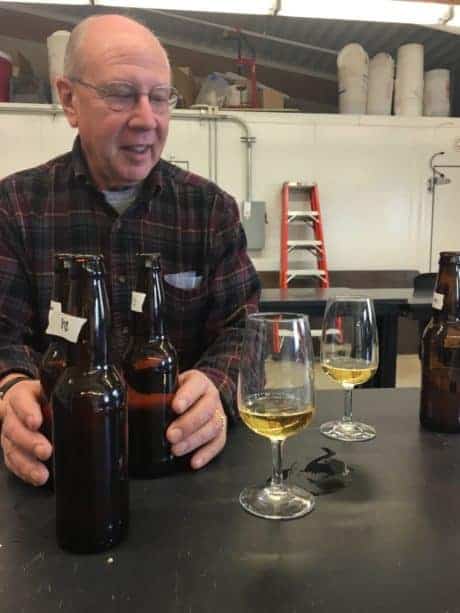 By noon on this bottling day, Drew is ready for tasting and goes to the lab cupboards for four glasses apiece. Drew is comfortable in the lab and accesses the storage as if it were his own home. While pouring, Drew continues to recount his history with cider making. From 2004 to 2011 he had his own production company, and meanwhile Peter was flying in and out teaching at WSU. Drew grew his own bittersweet and heirloom apples on a little over an acre of land and made cider under the “Red Barn Cider” label. Red Barn ciders were sent to the Great Lakes International Cider and Perry Competition and won gold medals for all and even Best in Show for one of them. Drew also helped write the definition of cider styles for the Beer Judge Certification Program Section 27 about cider and perry and co-wrote academic publications with the WSU research team, sometimes using his full name “Andrew Zimmerman.”

Perched on lab stools, we are in a hurry to get to the tasting of the Mott’s Pink cider first. It seems there is a lot of excitement recently about pink-fleshed fruit for cider making. Unfortunately, we are disappointed when we discover an unremarkable cider, with little aroma or color of interest. It is the Kingston Black that lights up our eyes with its fine tannins and complex flavors. We refill our glasses.

On a roll now with our drinking and talking, Drew continues. In 2014 and 2015, attendance at Peter Mitchell’s P&P classes grew and grew, with waitlists of up to a year long. With the increased demand, Peter was flying cross-continent almost every other month and was looking to hand over the training of cider makers to the North American industry itself in order to focus on bringing cider to other parts of the globe. He also still had his Cider & Perry Academy (CPAC) back home in the UK.

After the exchange of ideas with Drew, other cider makers and affiliated organizations, a plan was proposed to formalize the training program and create an oversight committee of cider industry members to maintain standards and direct the evolvement of course curriculum. The exciting result is CINA, an institution that will be partnering with both academic and industry leaders, including Cornell and Oregon State Universities. Cornell just finished its first training session and OSU has its first program coming up in August.

Drew presses a cap on the half-finished bottle of Kingston Black and sends it home with me to help win my husband (a wine drinker) over to the joys of cider. Drew has finished his work at the station for the day and has to rush back to his wife, a yoga instructor, and their new acreage on Whidbey Island. As I leave him, I have the impression that he is a man satisfied by his life’s work in the cider industry, and most of all he seems pleased that with CINA, the Cider Institute of North America, cider culture in the United States will continue to blossom.