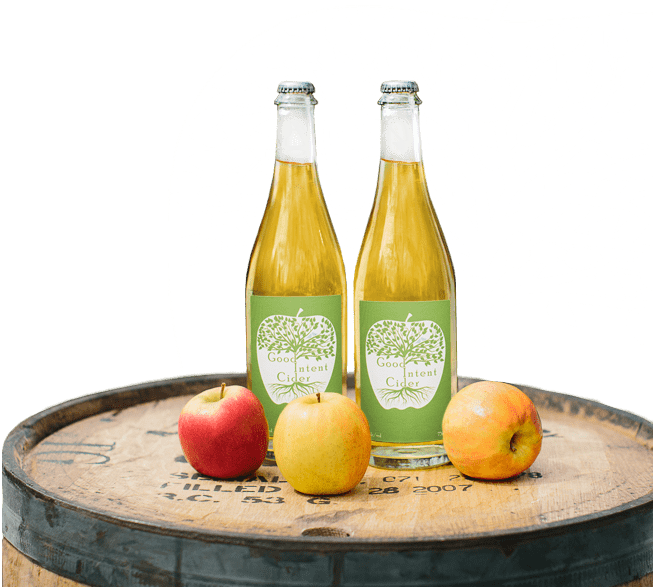 We recently spoke to Adam Redding, owner of Good Intent Cider, a family-owned and -operated cidery located in the heart of Pennsylvania apple country (Gettysburg!), to find out how one becomes a hard-cider maker, what makes a cider a cider, and the grassroots efforts at getting their product to their customers. Don’t worry—we also found out how you, our reader, can get your hands on some Good Intent.

Town Dish: Tell me about how Good Intent Cider got started.

Adam Redding: In 2010, I made a sample batch of hard cider through a cider-making class. I got good feedback from friends and family, so we started with 20 gallons at a time. After we got our licenses in 2012, we moved up to a 130-gallon tank. Now we’re making 400-gallon batches. We’re slowly ramping up with plans to produce 1200 gallons in 2014, which is triple what we did in 2013.

I heard the production facility is at your parents’ house in Gettysburg—can you explain how that works?

(Laughs.) Well, my parents are saying they want to truly retire, but for now and the foreseeable future, we have our lab in my dad’s old printing machine room, our packaging and labeling in his old office space and part of the garage is used for fermenting.

Was there a learning curve for the lab work involved in fermenting the cider?

There is a lot of chemistry that comes into fermenting cider, but I’m a scientist for a drinking-water pollution-control company by day, so I understand the fermentation process and why the chemistry works the way it does. 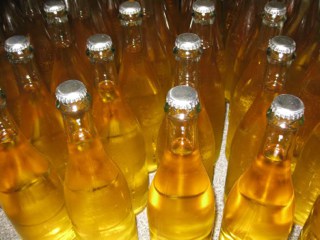 That seems like a natural progression from one form of chemistry to another. What sets Good Intent cider apart from other East Coast ciders?

We produce full-juice cider, which means it is sold as a wine-quality product. There is no water added to our cider to reduce the alcohol content. When apples are fermented, particularly using the high quality apples in Adams County, the alcohol will be between 7% and 10%. You can’t produce a cider above 5.5% alcohol without a winery license, so manufacturers will make up for the watered-down taste with sugar, carbonation or filtered juice.

Can you describe for our readers the two brands of cider that Good Intent produces — Adam’s Apple and North Meets South?

They are both made with the same base cider. North Meets South (10% ABV), which was created to commemorate the 150 anniversary of the Battle of Gettysburg, goes through a barrel-aging process, which is relatively short because we don’t want the bourbon to take over the flavor of the cider. We tried whiskey, but it was too powerful and raw; the 5-year-old-bourbon barrel has a nice softness. So, in the end it’s still a cider but we wanted a bit of character with the bourbon and oakiness.

With Adam’s Apple (8% ABV), we stayed true to form, using a moderate level of carbonation and a semi-dry level of sweetness. It undergoes very fine filtration; we want it to be pure, without excess yeast character. Also, we use cane sugar so it doesn’t add additional flavor. We experimented with maple syrup and agave and also brown sugar, which adds a nice amber but you get molasses notes. We wanted to stay simple. 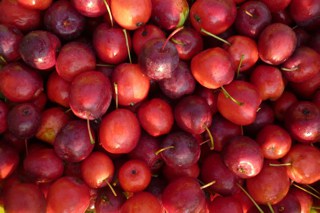 Interesting. For you, what makes a good cider?

I want a good mixture of apples to avoid the taste being flat or boring; mixing them creates a synergy. We’ll sample our cider during fermentation, then after when dry. Once it’s filtered and stored then we’ll taste it again or during the barrel aging we’ll taste once a week to see how it’s progressing. Before we mix the final batches we’ll make some trial batches, but now we know what sugar content we want—we tend toward the dryer side because there are plenty of sweet hard ciders out there. We’re more of a sipping cider.

I’m sure sampling the cider is fun, but does it ever get old?

Well, we definitely have to be careful because the alcohol content is pretty high. I feel like intoxication with cider tends to be a happier one than with wine or beer, though, so we have fun trying it out.

I know you have production in Gettysburg, but you actually live in the State College area. How are you making your cider available to people in both regions of PA?

We have our cider in a few restaurants in Gettysburg and State College. At this point in our business, we really try to structure our hand deliveries around our travel, but people can also contact us and arrange a pick-up or drop-off. Because of our size, we are flexible about getting our product to people. We have a presence at various farmers markets as well as the Apple Harvest Festival and we’re also in the process of readying our tasting room for a summer opening in the State College area.

What do you say to the person that says, “I have tried hard cider; it’s not for me.”

First, we have our cider in restaurants where the quality of the food matches the cider. It does well on tap and is sold in wine-sized glasses. We really rely on the bartenders to encourage people to try a sample. In general, if people have been turned off by mass market sweet wine cooler-type ciders, they will tell me at the farmers markets that they don’t like it. But, they sample it and say they like it. People have an idea of what hard cider is like in their head, and we have to get them over the hurdle. I don’t know that we’re making the best cider in the world, but we’re making a pretty darn good one.

You’re one of the first hard cideries in Adams County—what is that like?

Everyone locally has been pretty helpful. There are so many players in the craft beer market that I wonder if that camaraderie has gone; wineries and cideries are still friendly. Other local wineries are even sending people to us for the our bourbon barrel style. I’m excited for Big Hill Winery & Ciderworks also in Adams County. We know how to grow apples there, and other people should be making cider.

What’s the easiest way for our Philadelphia-area readers to check out Good Intent?

We don’t find it strange for people to come by and pick up a six-pack of cider, so anyone heading to PSU for games or any other reason can visit us while in the area. We’ll also be back at the Philadelphia Navy Yard on Saturday, September 27, for Pour the Core. We should have both main ciders available.