Kurant Ciders is one of the most exciting new local cider makers around. They’ve gained a following by creating amazing dry traditional hand crafted ciders. I recently had the pleasure of meeting up with Joe Getz and Mike Meyers, founders of Kurant Ciders. I grabbed a pint of cider with them at Round Guys Brewery in Lansdale, which is also where Kurant produces their delicious hand crafted ciders. I was meeting up with them for a Q&A, but before I started the interview I needed to grab a glass of their cider. 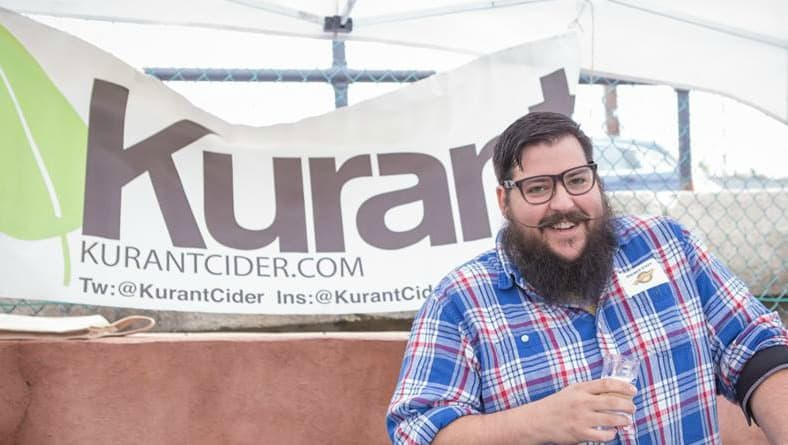 I went with Daily, their cider crafted for any occasion. Daily was a true treat. This slightly cloudy golden yellow cider gave off aromas of citrus, peach, mandarin and apricots. When it hits your tongue Daily provides flavors of lemon, crabapple, apricot, pear and lime. What really sets this cider apart is the dryness, which is reminiscent of a white wine. This was complemented by a touch of sweetness and mild tart notes. All of this combined created a great complexity, yet it was still refreshing and easy to drink.

After whetting my palate with a cider I got to business speaking with Joe and Mike about their experience opening up Kurant Hand Crafted Ciders.

Cider Culture: When did you start Kurant Cider?

Mike Meyers: We’ve been working on the project for maybe a year and a half-ish and we’ve been in full-scale production since the beginning of June, end of May.

How long have you been producing ciders in general?

Joe Getz: I started homebrewing beer eight or nine years ago, ciders for four or five years now. So that’s where my interest in the project started. I decided to go big with that. 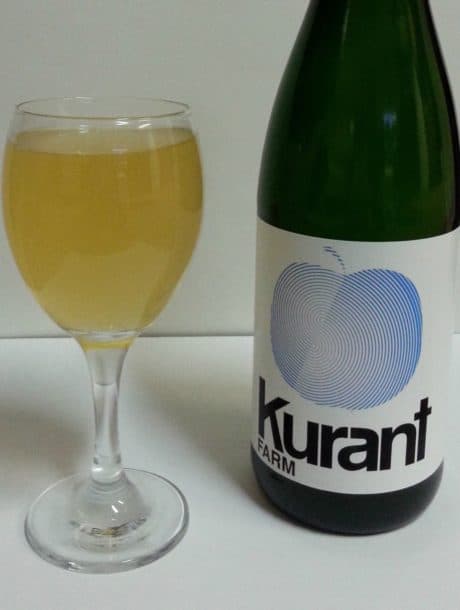 How did you decide to move from brewing beer to cider?

Getz: I had set aside an idea to start a brewery, [but] it just never felt like the right time since the market around here is pretty full. It feels like the only way to have a more guaranteed success is to have a full brewpub and restaurant, and I never wanted to have a restaurant, I just wanted to be in production. So, I never really started the brewery thing and then cider just took off here in the U.S. So, I decided to give that a whirl. It’s still basically the same thing, just making a different product.

Meyers: I was trying to do a brewery and I had bought a whole bunch of full-scale equipment up in Rhode Island and the guy I was working with bailed on me. So it’s kind of similar, that’s how I got hooked up with Joe. He was telling me about this whole cider thing, and how it was the next big thing. Joe does all the production and I do the sales and marketing.

Where do you get your apples?

Getz: We get everything through a wholesaler here in Lansdale, a big press house. They get everything from Pennsylvania, and we’re working with Frecon Farms out in Boyerstown for small specialty stuff.

What were some of the issues you had to overcome while creating this business?

Meyers: Some space issues at this time. We are trying to expand and we need a little more room.

Getz: I think there are a lot of big hurdles with getting going. We face the same problems breweries face: space, equipment, distribution and trying to figure out how to put it all together. Like a lot of my friends that started breweries, we didn’t own companies and we weren’t in business for ourselves. Everything is a learning curve; everything we do is often the first time we are doing it. So, it’s pooling a lot of knowledge from the local scene, from a lot of the breweries and cider producers around here and getting good info and making decisions based on that. So, I think almost everything is some sort of hurdle at this point. 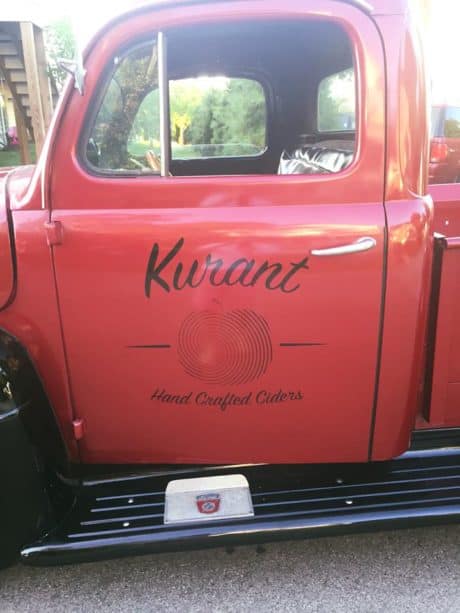 Has it been beneficial being with Round Guys? Have they been helping you get over the hurdles?

Meyers: It’s a good way to get our feet wet for sure. They’ve helped us out and we’ve taken advantage of that. We’re just selling more and looking for some space now to expand with the demand, which has been good. It’s been a little difficult because Joe and I work other jobs, too. So, we can’t devote 100 percent of our time to this. Which we want to do … but we also want to pay the mortgages.

Pennsylvania liquor laws limit the ABV of ciders to 5.5% for most cider makers, depending on their liquor license. Has that been an issue for you guys? Have you had to design your ciders around those laws?

Getz: Yeah, that’s a serious production issue for us. I think it’s a real issue for anybody under a brewery license making a cider. There’s a couple ways to deal with it. Luckily for us, our supplier is willing to be pretty flexible and I can just say, “Here’s the gravity I need to start at,” and they’re pretty good at providing us juice that is in that range where I don’t have to mess with it pre- or post-fermentation to hit that 5.5%. That’s lucky for us, but it’s not the norm for most small producers. It’s a big challenge, so luckily our supplier worked with us on that aspect. I don’t like to make everything at 5.5%, it’s super limited. It really changes the character of some of the things you can do. As the harvest gets higher in sugar further into the year, that’s not really an option for us. So, early harvest we can pretty much get anything from anywhere, just because the gravity will be where it needs to be. It’s a huge limitation, one that drives me nuts sometimes.

Have you had issues with informing the audience? Do you feel like a lot of people understand micro-cider?

Getz: It’s an interesting mix at this point. With cider in the U.S. there has been this huge resurgence in the past three or four years, [and] with that growth it’s an ever-changing audience. I think we come across a really wide gamut of cider drinkers. We get a lot of people that are very much used to Angry Orchard and Woodchuck and those things, and it can be a challenge to convert those people into a much more traditional, dry style, real cider. But then there are a lot of people who just enjoy craft beer, who are transitioning into cider because it’s more in front of them at this point. I think those people are getting it quicker. They didn’t have a preconceived notion of what cider was in their head, so we’re getting to present to them what cider is. It is a bit of an educational curve, I think, for most people.

Meyers: I think most bars now at least have a cider line. I’ve always been a beer drinker and three or four years ago you never noticed whether there was a cider on draft or not. Angry Orchard has at least done that for us, I think as far as pave the way for it to be an option. I think it is catching on like the beer does, where now everyone wants something a little different or something local. 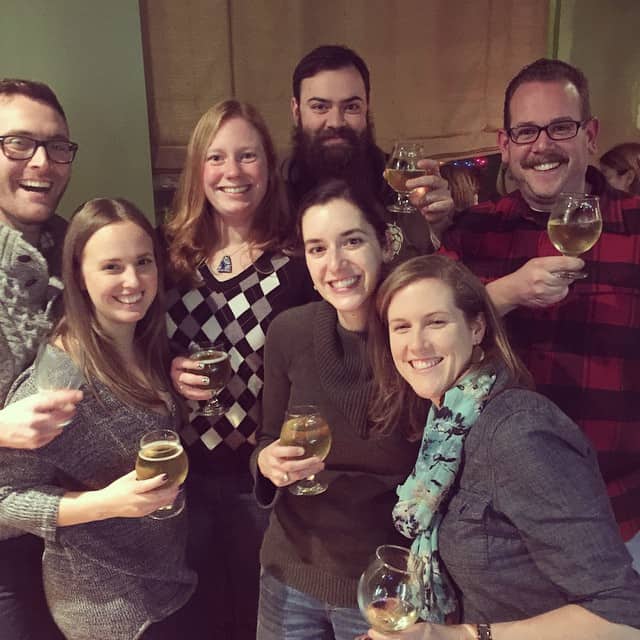 You currently bottle your ciders. Where can readers get their hands on a bottle of it?

Getz: Bottles are very limited. We just sell them here. The coffee cider, Cafe, is going to get bottled soon and it should be available in a few weeks. We’re trying to move more toward bottles. It’s just a logistical issue for us since we’re so small. It’s a pretty time-consuming and costly endeavour overall. We’re easing into that, we’re trying to sort of get our feet wet. We did it once to try it out to see if it was going to work for us. It definitely worked out well, the sales were really good.

Do you have any new ciders in the pipeline?

Getz: Yeah, we’re working on our fall cider seasonal now. It’s going to be a spiced cider with some brown sugar in it. It should be out in a few weeks. We’re just finalizing that.

Any other plans in general?

Meyers: We’re trying to be full time and trying to figure out a way to make more to this. The reaction, I think, has been awesome. So, we’re definitely onto something, just need to make more of it.

Learn more about Kurant and stay up-to-date on upcoming releases on the web and Facebook.