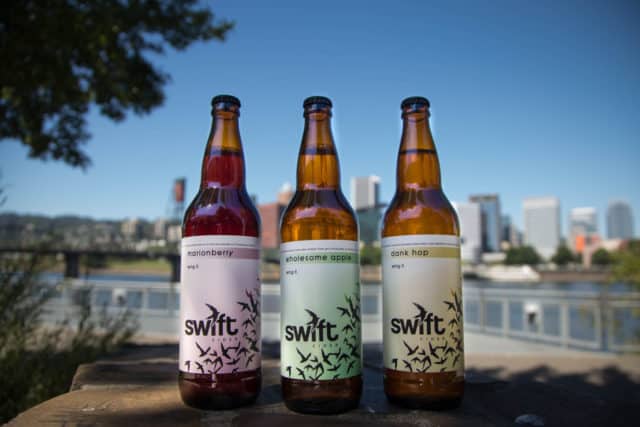 Swift Cider, an urban craft cidery based in Portland, Oregon, is the reincarnation of Outcider, which was originally founded in spring 2012. Swift entered all three of its flagship ciders in this year’s Great Lakes International Cider and Perry competition (GLINTCAP), the world’s largest cider competition. When the score sheets were tallied, Swift walked away with unprecedented wins for all three of its entries.

Dank Hop and Marionberry won gold medals in the Hopped/Herbal Cider and Fruit Cider categories. Wholesome Apple won the Bronze medal in the New World – Modern category. While Oregon producers made a strong showing by earning 66 medals, Swift stood out as the only Oregon company to win gold in multiple categories.

On the company’s recent wins, Swift’s cider maker Mark St. Germain said, “It was a very proud moment when we heard they all won medals, including two golds. Next year we will be back with even more cider.” Founder and head cider maker Aidan Currie was “glad to hear that the judges can taste the benefits of small-batch craftsmanship and Northwest-grown ingredients and that they all prized the balanced sweetness Swift is known for.”

As the company grows its seasonal and limited release offerings, Swift plans to enter more ciders in GLINTCAP 2017.