There’s a lot to love about Vermont: green mountains; rolling fields; that big, beautiful lake and some of the most sought-after craft beverages and farmstead artisan cheeses, often only available within state lines.

Once you’re in the Green Mountain State, plan to do a little hunting to score delicious food and drink souvenirs. Windfall Orchard is in Cornwall, just a five-minute drive from Middlebury’s quaint downtown in West Central Vermont. I sped right past the barely marked driveway, doubling back to the handwritten sign.

A quick U-turn later, we found ourselves looking at a breathtaking view of Windfall’s small orchard—a collection of about 200 trees in 100 varieties on three acres—sloping down the hillside to the valley below. We also came upon farmer and cider maker Brad Koehler in the barn nearby, pressing the season’s first harvest from early varieties like Paula Reds and Jersey Macs.

Windfall’s European-style farmhouse hard cider starts out bright and fruity, then quickly becomes bone dry and a little tannic and citrusy on the finish; Koehler blends and wild-ferments the juice of 20 dessert and cider apple varieties, all grown on his property. Thanks to bottle conditioning, its bubbles are fine and furious, like the ones in champagne.

All ready to pour at the Vermont Cider Classic on this beautiful fall day. Head on down to Arts Riot to sample some of the best cider in New England!

Koehler directed us to the tasting room, where we grabbed a bottle of his hard cider and another of ice cider (I’m saving that one to pair with a lush, creamy blue cheese come holiday time, per Koehler’s recommendation). For his standard hard cider, Koehler recommended trying it with a tomme-style or washed-rind cheese.

And where better to think hyperlocal than Vermont?

At Twig Farm, located less than a 10-minute drive southwest of Windfall, Michael Lee raises a herd of goats on 40 acres of pasture and makes their milk into cheese. The wheels Lee turns out are rustic and funky, with brainy, craggy natural rinds that evoke the surface of a boulder or a dirt floor more than they do anything that was once milk.

They’re also hard to find: Lee doesn’t do on-farm sales or farmers’ markets, although he does sell to retail co-ops and restaurants in Vermont. But if you’re in the Bay Area, Boston, New York or a few lucky spots in the Midwest, you may be able to find his cheese. Failing that, you can always split a whole wheel with a few friends by ordering through his online store. To score my wedge, I doubled back and hit the Middlebury Co-op, which stocks Twig’s cheeses, and picked out a few varieties to try alongside Windfall’s hard cider. 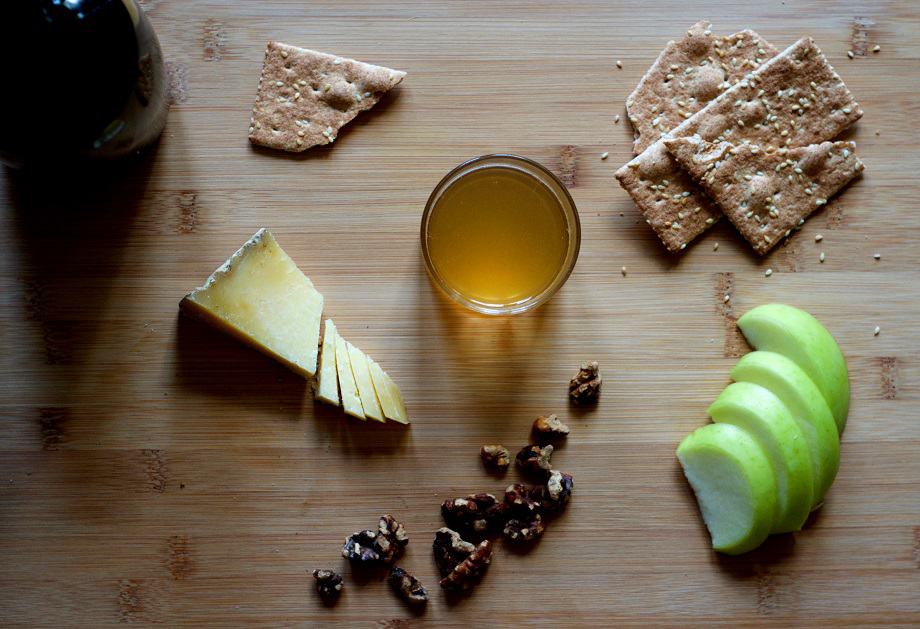 Indeed, the cider pairs beautifully with a tomme-style cheese, especially one with terroir from the same neighborhood. To make Twig Farm’s Mixed Drum, Lee combines raw milk from his goats with that of the Ayreshire milk from nearby Crawford Family Farm and ages it for no less than four months. The result is a dry, firm-textured natural-rind tomme with a buttery, grassy flavor and earthy, slightly bitter tang—a perfect counterbalance to the cider’s bright flavor and light, effervescent quality.

The next time you’re in Vermont, be sure to bring home Windfall’s farmhouse cider and Twig’s Mixed Drum as souvenirs. Serve up these goodies for lunch or dinner with some accessories like tangy cornichons, crusty bread and slices of saucisson sec—or keep it light with toasted nuts, fresh or dried fruit and your favorite sourdough flatbread.

Have you experimented with pairing Vermont ciders and cheeses? What are some of your favorite combos? Let us know in the comments!