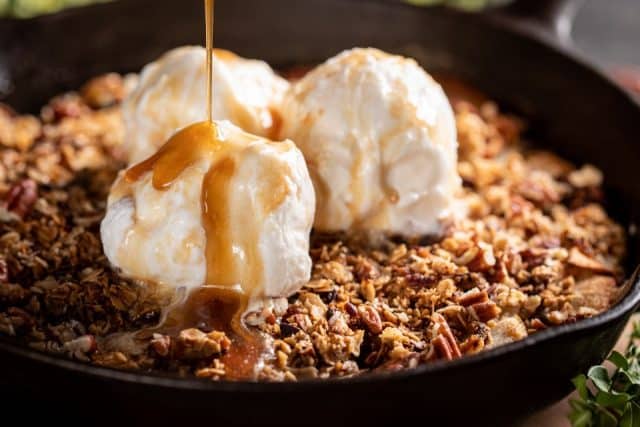 We’re not especially into describing food as “sexy”, but watching golden cider caramel cascade over a scoop of ice cream, making it melt ever so slightly into a warm serving of apple crisp leaves us with no other accurate adjective. This seasonal delight combines the ultimate flavors of autumn (apples, nuts, sugar and spices) with a glorious collage of textures (soft, crunchy, melty and chewy) for a total showstopper of a dessert. The best part is that the caramel doesn’t take a culinary degree in the pastry arts to pull off, and there’s no need to unearth your forgotten candy thermometer from the back of the junk drawer.

Serve this cider caramel apple crisp at your next dinner party or, really, any time that you want to indulge in a bit of fabulousness. Pro tip: Save any leftover caramel — or make a double batch — in a jar in the fridge, and serve with apple slices, pretzels or not-too-sweet cookies for dipping for an instant dessert plate.