For cider fans who want to keep up their self-education — or, if that sounds too formal, just learn cool stuff about the beverage they love — there is an unfortunate limit to what’s out there. That’s not to say that there aren’t awesome cider books, websites, seminars, certifications and so on. It’s just that, compared to beer, wine and spirits, the pool of resources is a lot more shallow.

But, there is a brand-new book that’s adding a much needed injection of life into the canon of cider-related publications: American Cider: A Modern Guide to a Historic Beverage! This easy-reading, well-organized book is accessible to everyone, from curious cider drinkers to hardcore history buffs. This book takes a multi-dimensional look at how cider is woven into the history of every region in the US; the info inside stitches together a quilt of captivating info about apples, farmers, geography and more. Published by Ballantine Trade Paperback Original, this must-read drops on March 2, 2021, and is available for pre-order now! 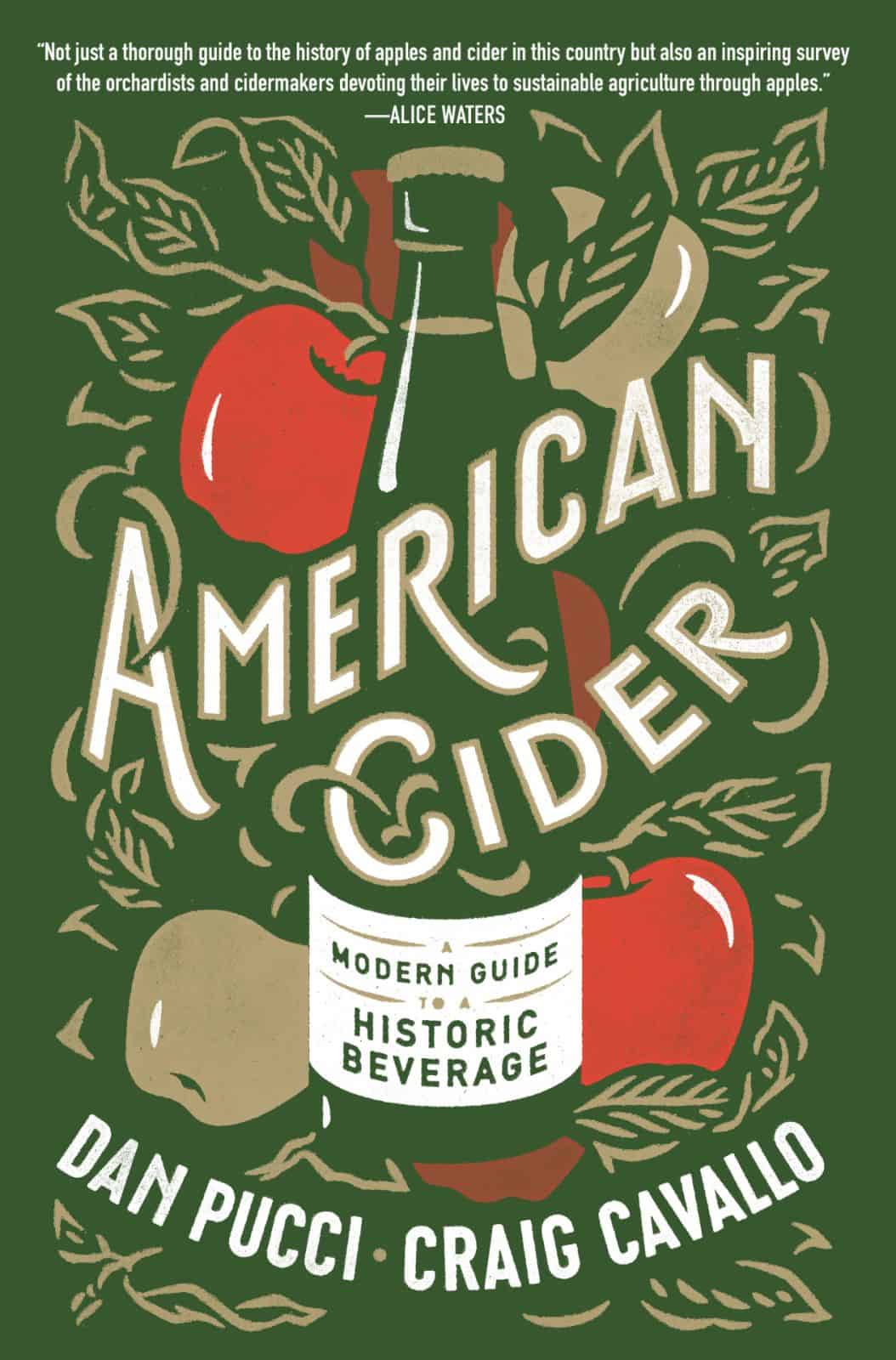 The book’s authors are Daniel Pucci, a true leader in the craft cider community (and occasional contributor to Cider Culture!), and Craig Cavallo, a food writer and co-owner of the cider-friendly market and cafe, The Golden Russet Cafe in Rhinebeck, New York. The two met while living in New York City in 2010, while both were working at the wine shop inside Eataly in the Flatiron District. For a few years, they worked together on and off at Eataly and Otto (a pizza restaurant in part of the same group as Eataly), forging a bond over all-things-fermented. 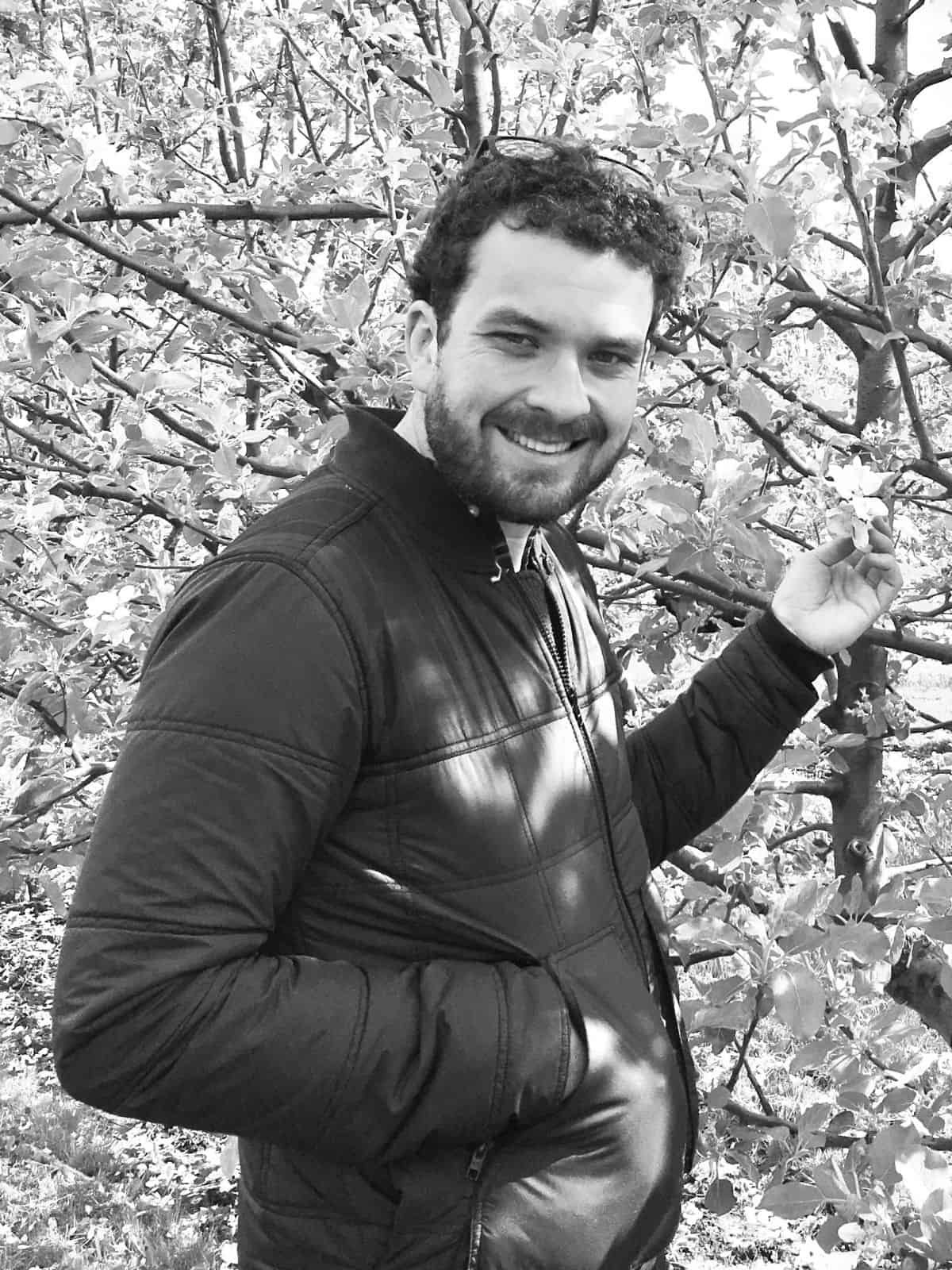 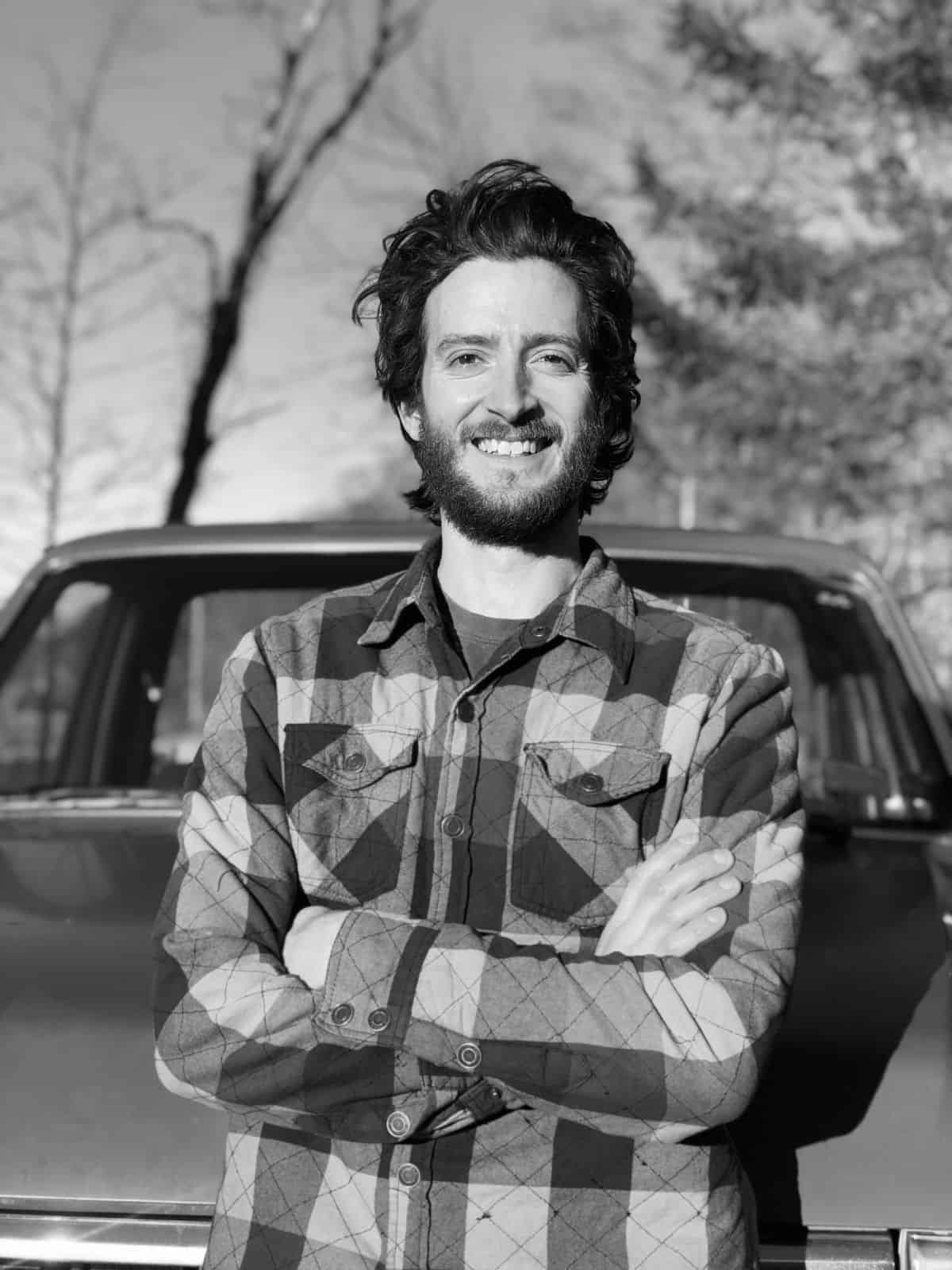 That friendship, which developed over the past decade, is what set the stage for this epic creative collaboration.

“There’s a lot of trust … throughout this whole process, I never doubted Dan to come through or execute whatever he said he was going to,” Cavallo says. “I give credit to Dan for being selfless and patient and letting me work through things. Dan’s a good brain to bounce ideas off of.”

The nexus of the idea for American Cider came about in 2017, when Pucci met a book editor through a friend. After writing a test chapter (which, incidentally, isn’t in the finished book), he began to feel like the project was more than he could take on.

“I felt like Craig was sort of the perfect complement,” Pucci says. “He is an enthusiastic writer.”

The duo knew they wanted to do a book about cider in the United States, but wanted to develop it beyond a general survey of cidermakers.

“It doesn’t really make sense to do that in this industry, which is changing so fast,” Pucci notes. “We wanted to give context with snapshots of what’s happening right now. It’s how cider got to where we are now, and what kind of base we’re building to grow.”

At the core of the book (wink, wink) is the indisputable fact of how intricately woven apples were, and are, in the development of this county.

“We were able to learn so much about humanity in this country, solely using the apple as our hound dog, so to speak,” Cavallo says. “We followed the scent, and saw how different apple culture is, state to state.”

Their research also opened doors into the injustices that are present in our country’s history at nearly every turn, and especially in agriculture.

“A lot of today’s injustice and racism … that path is not so far behind us,” Cavallo notes. “Those things are deeply, deeply rooted in our country. We wanted to make sure that we addressed, and did not overlook, info about injustice, inequality and disenfranchisement. It’s been overlooked in many genres. Understanding that we’re two white men who wrote it [the book], and we don’t necessarily know how to fix it, we don’t ignore it and hopefully that’s a start.”

“Big themes in the book are inequality and people without power getting land repossessed, and who were moved for more profitable ventures. It’s the cyclical nature of history, people making the same mistakes,” Pucci says. “This is definitely a book that’s about more than cider and apples. As a cider community, we need to be aware of the issues in the agricultural system.”

American Cider opens with a brief history of cider and the origin of apples, with a quick overview of how cider is made, and casual instructions on tasting cider. It then dives into the different cidermaking geographical regions of the US, starting with the Southeast, heading up into New England, New York, and the Mid-Atlantic. They guide the reader through the Midwest and mountain country, and finally out West to California and the Pacific Northwest. Each section is opened by a hand-drawn map, inspired by the maps found at the beginning of fantasy novels, by artist James Sligh. 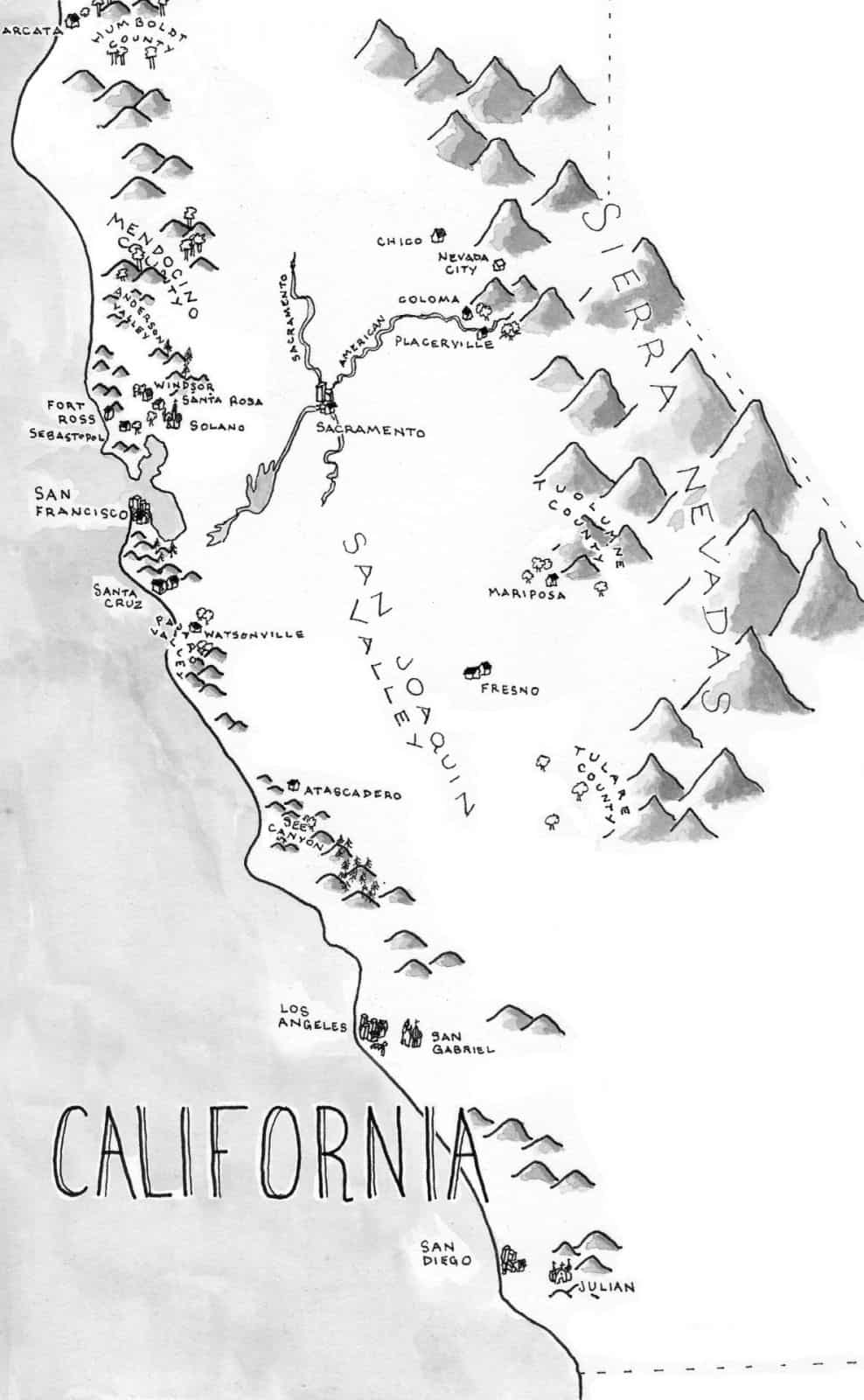 And as the reader progresses through each region, Pucci and Cavallo introduce progressive periods of cider’s history. Each region also serves to introduce different social and economic themes surrounding cider: slavery, class, development of cities, towns and market access, transportation, the rise of big agriculture, the role of universities in modern agriculture, climate change, and workers’ rights in big and small industry.

To conduct research over the past few years, the duo conducted over 100 interviews across the country with cidermakers, amateur fermenters, people at ag extension schools, scientists and so on. When time allowed, they also visited cideries all over the country.

“I transcribed the interviews in real time, which were broken into regions,” Cavallo remembers. “I was looking for something from California, and the interview was like 60 single-spaced pages in one document, just for one region! It was a lot of siphoning through to pull out the really fascinating nuggets.”

They also mined online archives of primary texts from the 19th Century, as well as the New York Library.

“There’s an immense amount of info cataloged online, like you can find meeting minutes from Pomological Society meetings from the mid-1800s,” Pucci says. “We found these notes from the 1830s from the New York Horticultural Society where they were saying, ‘We need to get people to drink more cider!’ There were so many rabbit holes of exploration.”

Because of COVID, Pucci and Cavallo won’t be promoting American Cider with a traditional book tour, but they do have a growing series of Zoom book talks scheduled this spring. On March 2, there’s a book launch party and tasting with Liberty Ciderworks; on March 6, they’ll host a virtual tasting at chat with ANXO Cider; and on March 10, they’re presenting a cider talk and Q&A with Tapped Apple. Hopefully, they say, there will be more events to come throughout the spring and summer.

For this friend-and-co-author team, the experience of writing, publishing and promoting this book has been humbling.

“Apples and people are inseparable. The people we’ve met, everyone’s just gung-ho and selfless,” Cavallo says. “The cider community is so cohesive and collaborative and willing to do whatever to help people who want to help cider.”

Congrats to Dan Pucci and Craig Cavallo on this awesome new book! We’re excited to see it make its impact on the cider culture. Check out American Cider, available for pre-order now, and officially out on March 2, 2021. Once you’ve given it a read, let us know what you think, either in the comments or on the Cider Culture Facebook page!