The Best Cider Donuts in the Midwest

You don’t have to be a hard cider fan to appreciate the otherworldly deliciousness of cider donuts, but it certainly doesn’t hurt! All autumn long, we make it our mission to obtain and consume as many warm, sugary cider donuts as possible — we’re constantly on the lookout for them at farmers markets, local bakeries and, of course, orchards and cideries. While we’ll never turn down one of these seasonal treats, we admit that some are superior to others.

If you live in the Midwest, you’ve got so many good spots to choose from to load up on cider donuts. Here are the top spots to find them in your area! (For our list of cider donuts on the East Coast and West Coast, see here and here.) 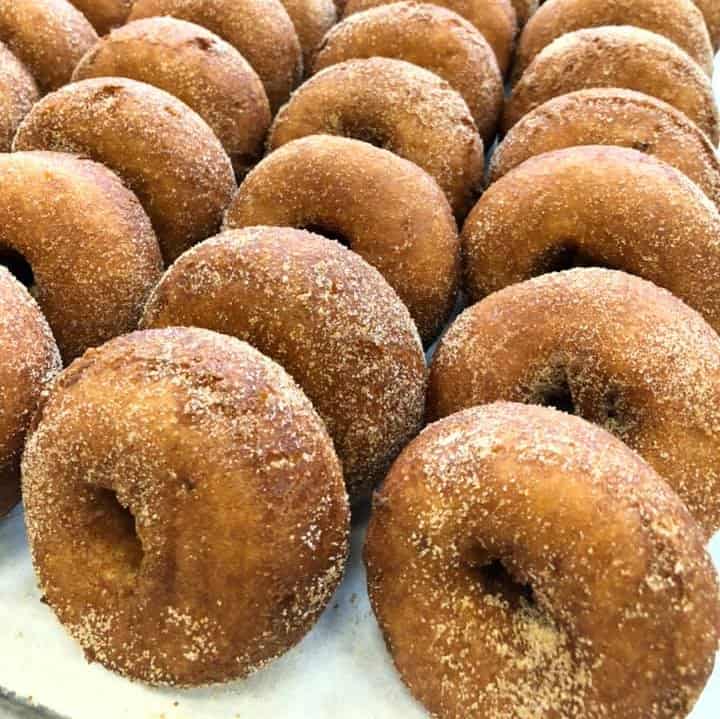 Not too far from Chicago, find All Seasons Orchard in Woodstock, IL. Its famous cider donuts (made fresh each day) are a perfect snack after picking apples, walking through the corn maze, or strolling through the pumpkin patch. Don’t forget to pick up some sweet cider, made on the farm’s cider mill, or treat yourself to an apple cider donut ice cream sundae! 14510 IL Route 176, Woodstock, IL; (815) 338-5637.

With multiple locations throughout Illinois (as well as Kentucky and Missouri), Eckert’s is the largest family-owned and family-operated pick-your-own orchard in the United States. Its farms have so much family fun to discover, including sustainably grown PYO crops, concerts and events, educational programming and more. These folks also know their way around a mean cider donut, which are made daily. Multiple locations. 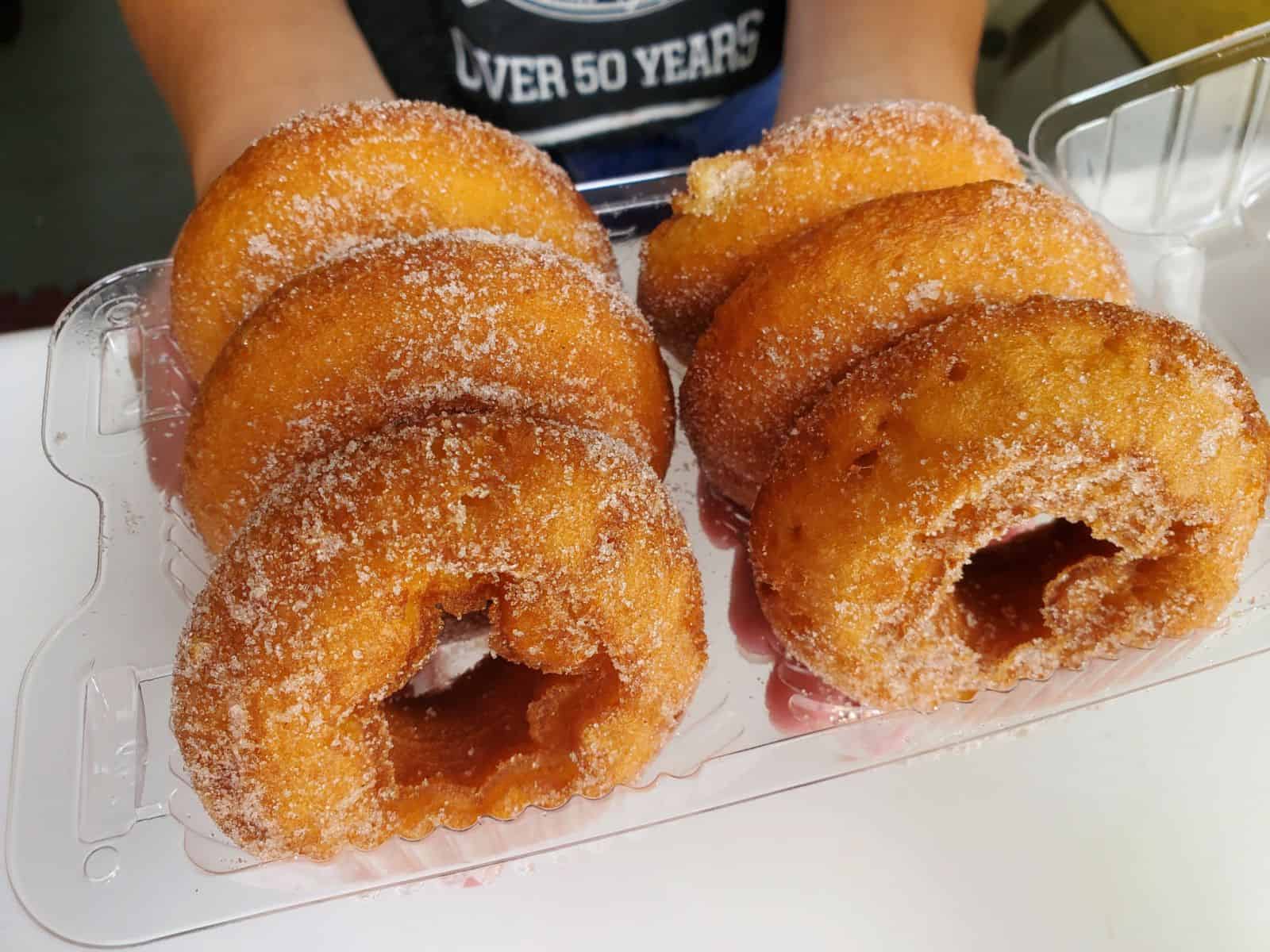 Since 1969, Stuckey Farm has been a destination for fall fun, with PYO apple orchards, a corn maze, festivals and more. Its general store is well-stocked with fresh produce, locally made provisions, like jams and salsas as well as tasty snacks; swing through on a weekend to try Stuckey’s famous cider donuts, made with real apple cider. 19975 Hamilton Boone Rd., Sheridan, IN; (317) 769-4172. 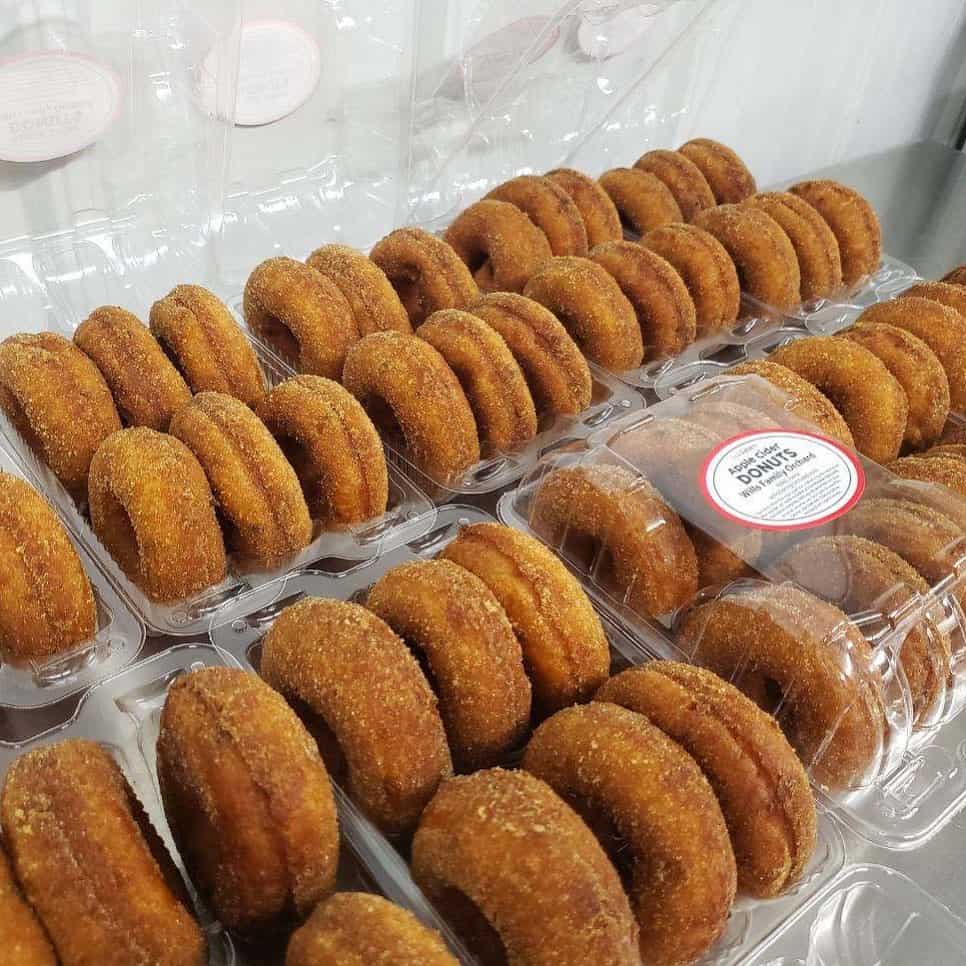 Will’s Family Orchard is as 32-acre family-owned farm in Adel, just about 20 minutes west of Des Moines. Its organic orchards produce a variety of apples, which can be purchased from the farm’s market. Will’s also makes a wide range of products, like fruit spreads, pies, ciders and donuts! Its apple cider donuts are widely praised for their deliciousness. Note that currently the orchard is only open to visitors on the weekends! 33130 Panther Creek Rd., Adel, IA; (515) 321-1847.

Unlike so many orchards that only provide cider donuts September through November, Wilson’s Orchard offers its cider donuts year round in its farm bakery. These craveable delights, which may contain animal fat for an old-fashioned flavor, are just one of many ways to enjoy this picturesque location. There’s also a smokehouse, a fancy restaurant, Rapid Creek Cidery inside a 100-year old barn, and a line of handcrafted hard ciders and seltzers! 4823 Dingleberry Rd. NE, Iowa City, IA; (319) 354-5651 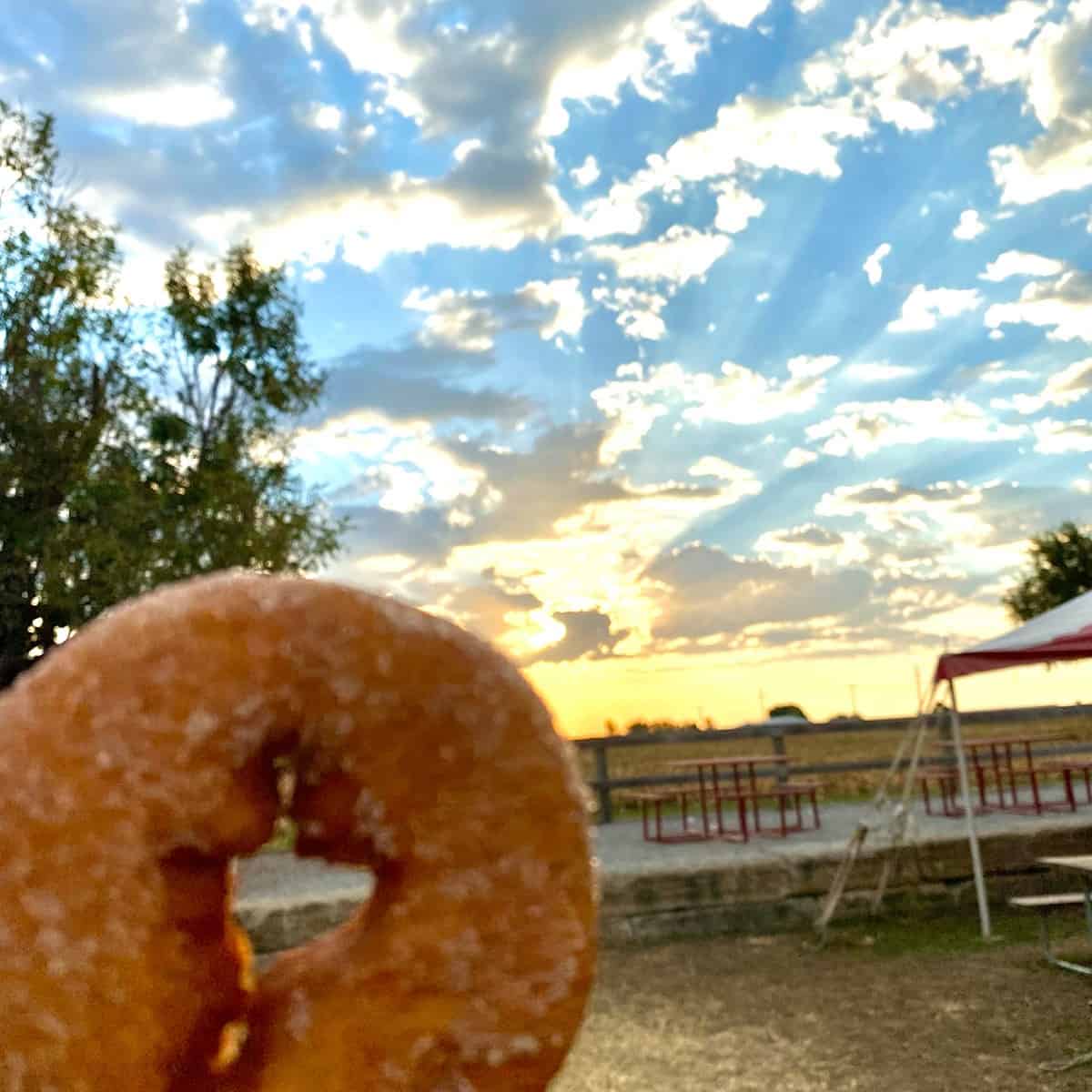 Cider donut and a Kansas sunrise at Louisburg Cider Mill

Farm fresh cider, creative gifts and heaps of baked goods are the name of the game at Louisburg Cider Mill & Country Store! Every fall, it releases its wildly popular cider donuts, which fans snap up by the dozen after enjoying the corn maze and pumpkin patch, or when they’re cozied up with friends and family around a firepit. 14730 K68 Highway,
Louisburg, KS; (913) 837-5202.

At Cider Hill Family Orchard, “homegrown” sums up just about everything they do. Each fall, 38-acres of apple orchards are open to the public for picking, and the farm’s kitchen begins cranking out fall treats, like fresh cider from the mill, cider slushies, kettle corn, apple crisp, dried apples and their famous cinnamon cider donuts. 3341 N. 139th St. Kansas City, KS; (913) 721-2507. 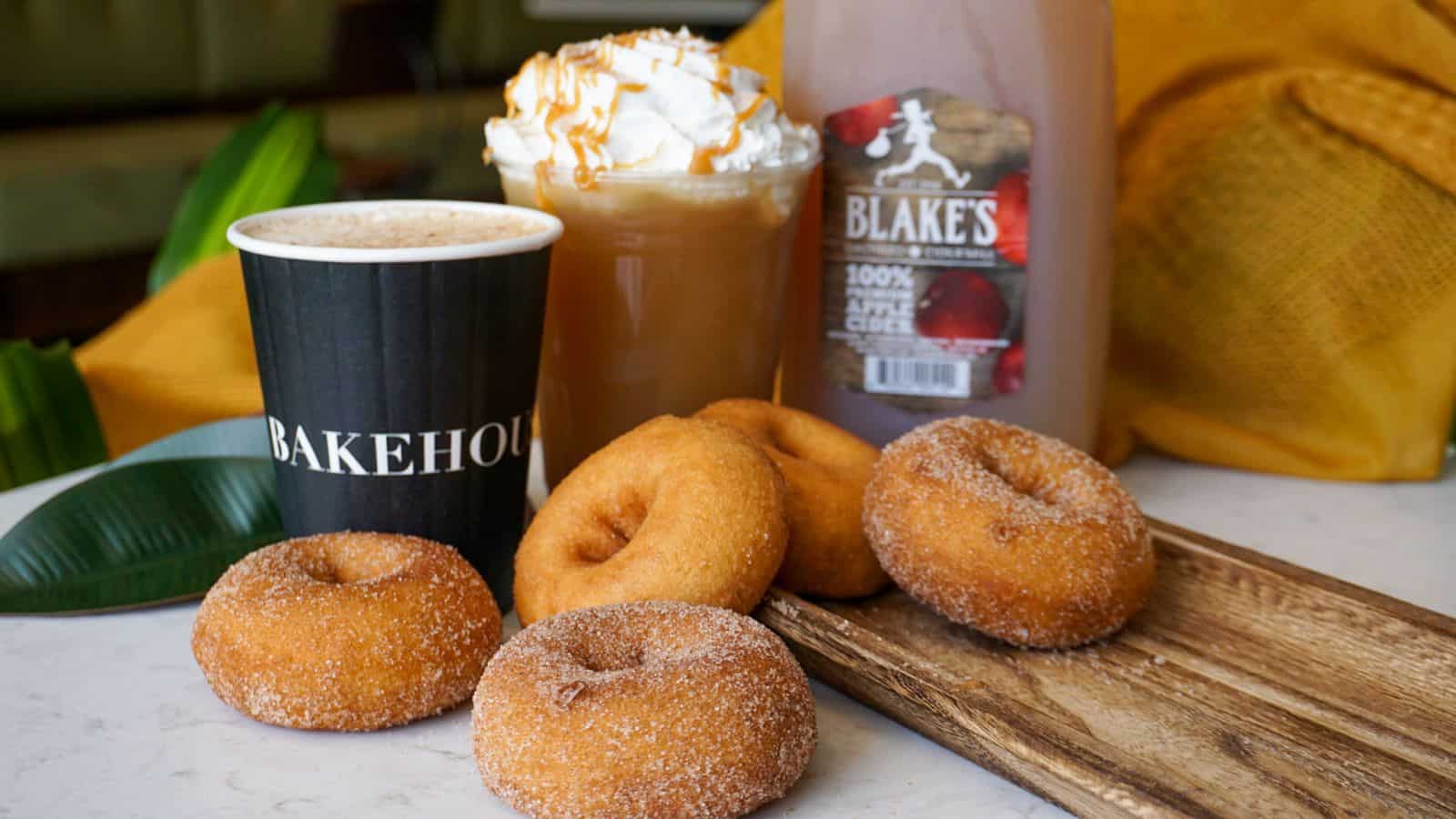 Blake Farms, home of Blake’s Hard Cider, is a true fall wonderland, with epic seasonal fun spread across two Funland locations. Expect attractions like haunted hayrides, a giant straw mountain, pick-your-own apples, a petting zoo and evening campfires. Of course, there are great food and beverage options at Blake’s Tasting Room and Blake’s Backyard, a garden center/cafe in Altamont. Brand new to the Blake’s family of brands is Bakehouse46, a scratch bakery collaboration between Cupcake Station and Blake’s Farm, with locations in Birmingham, Rochester and Ann Arbor (coming soon). Among the many sweet delights on offer, like cupcakes and caramel apples, the plain and cinnamon sugar cider mill donuts (which are available at other Blake’s locations, as well) are not to be missed! Multiple locations.

Michigan is an apple-obsessed state, which means that cider and cider donuts are a big deal during the fall. Locals agree that some of the finest of the bunch can be found at Franklin Cider Mill. The mill, which was built in 1837, churns out fresh-pressed sweet cider each day, which is sold unfiltered and unpasteurized. Its prized cider donuts, which are based on an old German spice recipe and baked fresh and served warm. A gluten-free version is also available! We must insist that you do not leave Franklin Cider Mill without trying one of its Cider Dogs, which is a hot dog marinated in cider (can you think of anything better?). 7450 Franklin Rd., Bloomfield Hills, MI; (248) 626-8261

In Grand Rapids, find Robinette’s Apple Haus, a pick-your-own orchard, bakery and winery that’s open year round. In the Apple Haus, find all a small cafe and bakery, serving kinds of decadent baked goods, including glorious cider donuts. If you’re in the mood to branch out, maple bacon and pumpkin spice donuts are also available. Gluten-free donuts are, too! On the winery side, Apple Haus produces a handful of hard ciders, as well! 3142 4 Mile Rd. NE, Grand Rapids, MI; (616) 361-5567. 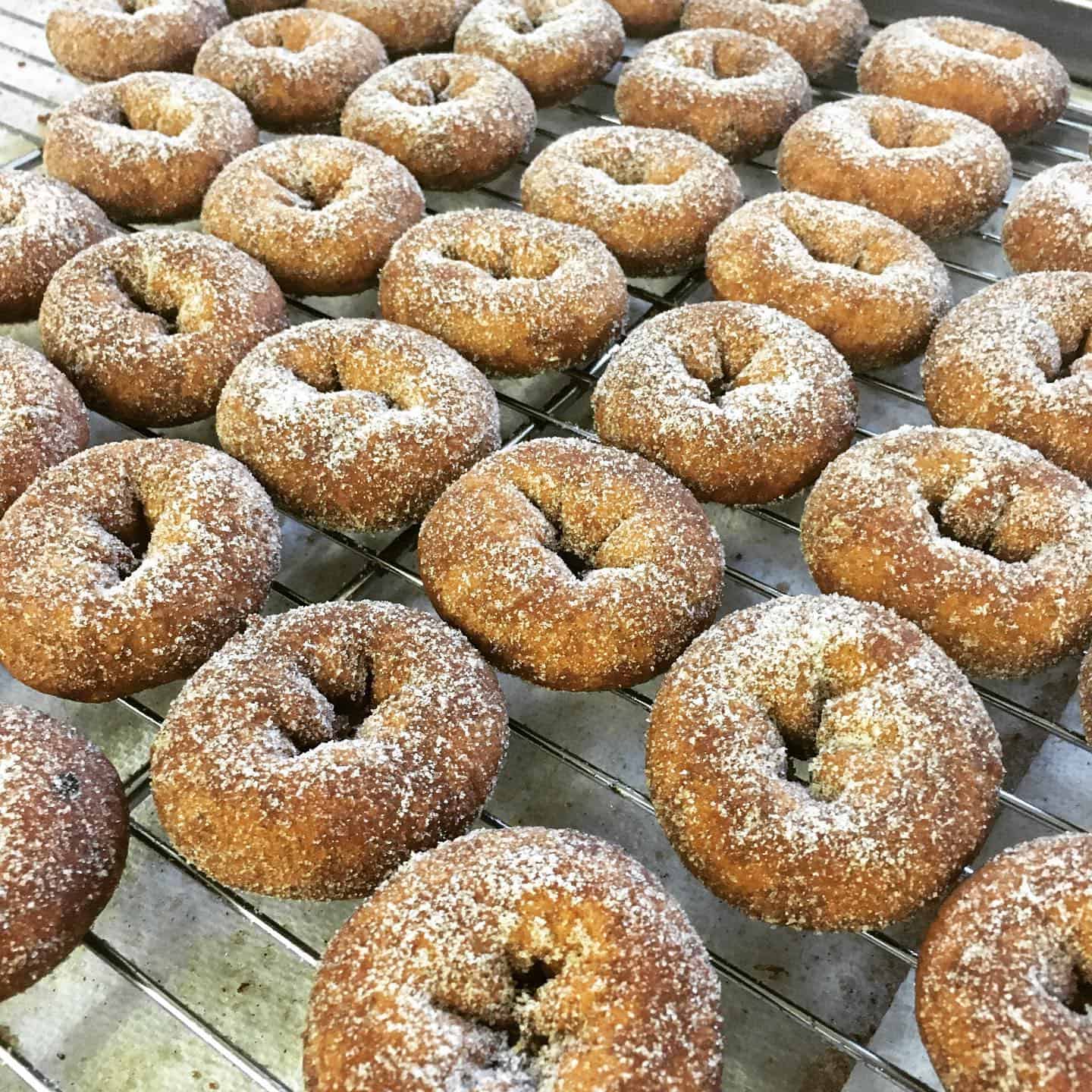 A lovely place to commune with all things apples, Sweetland Orchard allows guests to stroll its orchards (though it doesn’t offer PYO), and then enjoy a craft cider tasting kit or relaxed picnic on one of its outdoor tables. Snacks, like apples, cheese, cured meats and cider donuts, are available for purchase, or you can bring your own. But do get at least one cider donut and pair it with Sweetland’s ciders; we suggest the Northern Spy. 26205 Fairlawn Ave., Webster, MN; (651) 252-4337.

When a place calls itself World’s Best Donuts, expectations are going to be high. Luckily at this cute bakery, which has been doing its thing since 1969, the name is earned. Cider donuts are only occasionally offered, though they are a fan- favorite. The shop closes for the winter each year, so be sure to plan a trip before they shut down in late October! 10 East Wisconsin St., Grand Marais, MN; (218) 387-1345. 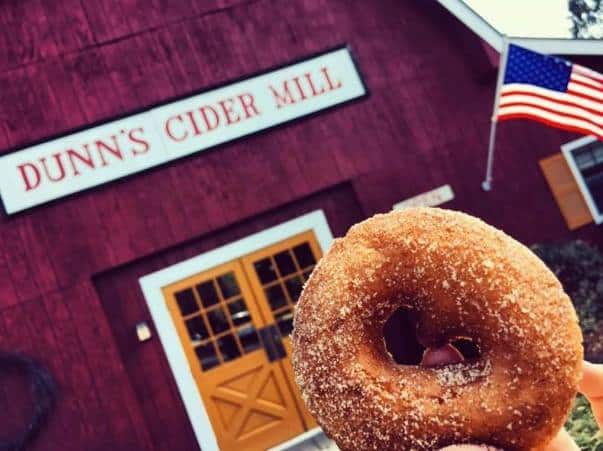 The lines are always long at Dunn’s Cider Mill for fragrant, fresh donuts straight from “Mark” (the farm’s donut machine). In fact, these babies are so popular, that they often sell out, so it’s best to check social media before heading over. Its fresh pressed cider is also top notch! Note: Dunn’s closed for the 2021 season on Oct. 9. Check back in the spring for details for 2022! 17003 Holmes Rd., Belton, MO; (816) 331-7214.

The bakery at Braeutigam Orchards is known for two apple-y treats: apple cider donuts and frozen cider slushies. We suggest going on one of those perfect not-too-hot, not-too-cool fall days and trying both! If you want to load up on other goodies, don’t miss the gooey butter cakes, pies and turnovers. While you’re there, hop on a free fall tractor and wagon ride, which whisks visitors out to the farm’s pumpkin patch and apple orchards! 2795 Turkey Hill Ln., Belleville, IL; (618) 233-4059. 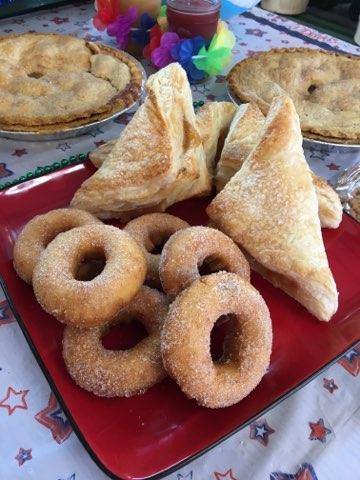 Fall is a time of abundance at Wostrel Family’s Union Orchard. The trees are dripping with 18 varieties of apples, like Arkansas Black and Honeycrisp and the pumpkin patch is dotted with orange gourds. Pick your own, or visit the Country Store to purchase already-picked produce, as well as baked goods, like tender, sugary cider donuts! 2405 South Hwy 75, Union, NE; (402) 263-4845.

Kimmel Orchard is a family-run 98-acre farm that combines agricultural education, tradition and fun! One of the main attractions is the Apple Barn, the on-site shop where you can find Kimmel’s famous sweet cider and cider donuts! Its proprietary recipe was developed by its own staff, and the donuts are made fresh each weekend. You’ll also find bottles of Kimmel’s own hard cider, made for them by Lincoln-based Saro Cider. 5995 G Rd., Nebraska City, NE; (402) 873-5293. 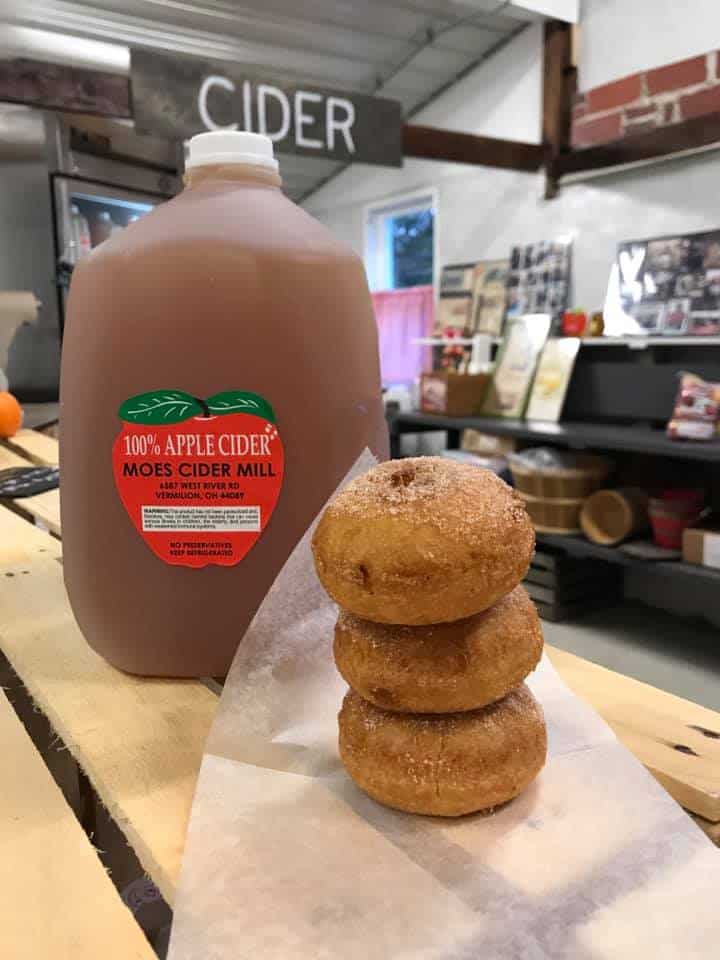 Moe’s Cider Mill is a quaint spot with cider at its core. In addition to apples and fresh-pressed cider, cider donuts are one of its most-beloved products. Made fresh each Saturday and Sunday, these are fluffy, cakey donuts, served with a generous dusting of cinnamon sugar. 6587 W. River Rd., Vermilion, OH; (440) 253-9762.

The fresh-pressed cider may be the start of the show at Haus Cider Mill; fans scoop it up by the gallon all autumn long. But the cider donuts are a close second, available throughout the season plain or sugared. Unrelated to donuts, but too cool to not mention: Haus also makes a mean sauerkraut, and hosts a Kraut festival every year!
6742 W. Calla Rd., Canfield, OH; (330) 533-5305. 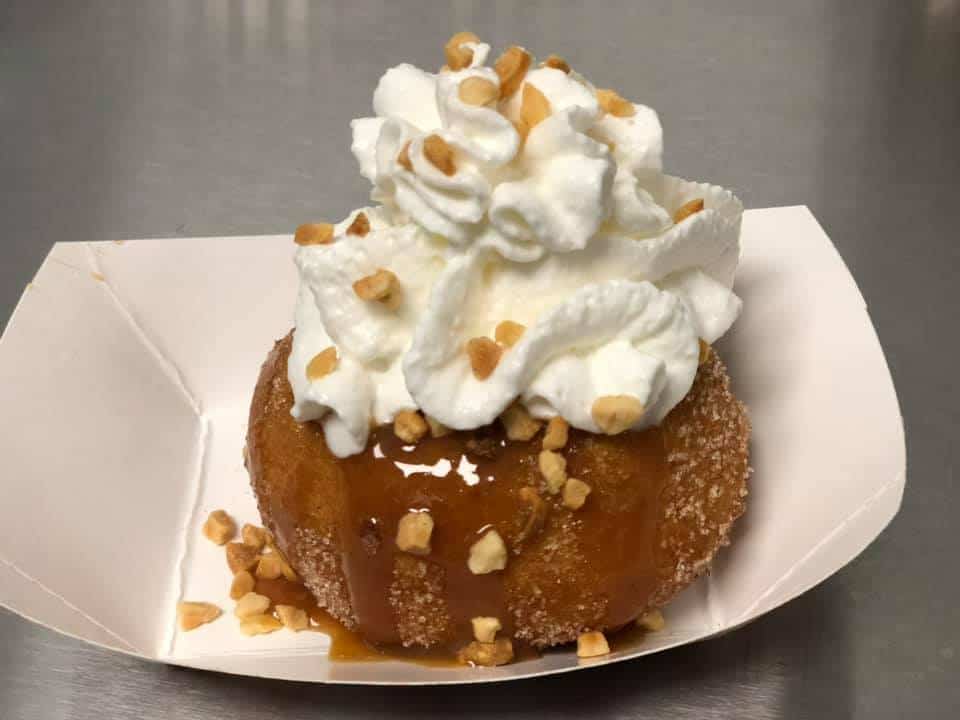 For five generations, Oakwood Fruit Farm has been growing 20 varieties of apples across 180 acres of orchards situated in the hills of Southwest Wisconsin. The farm’s Apple Retail Shop is home to a wide range of homemade products, and its apple cider donuts are an annual treat for locals and travelers alike. Local goods, including grass-fed beef, cheese, wine and maple syrup, are also for sale! 31128 Apple Ridge Rd., Richland Center, WI; (608) 585-2701.

By no means is our list comprehensive (that would be impossible!). So, let us know where your favorite cider donuts (and hard cider) can be found in the Midwest region of the US!