In our ongoing series, Women Making Waves in the Cider World, we’ve talked to women working in nearly every sector of the industry, from podcasters and bloggers to distributors to production pros. Though craft cider — and plenty of other beverage sectors, like beer and wine, for that matter — is still a male-dominated sphere, our anecdotal research has proven that there are indeed women playing crucial roles everywhere in cider.

However, our 16th installment brings us to a scenario that we haven’t encountered yet in the column: a cidery that’s 100% co-founded and run by women. There are only two employees, the co-owners Morgan Murphy and Maggie Przybylski, a couple based in San Luis Obispo, a small city on California’s Central Coast. Together, they are Two Broads Ciderworks, a small-batch, agriculture-driven cidery founded in 2015. 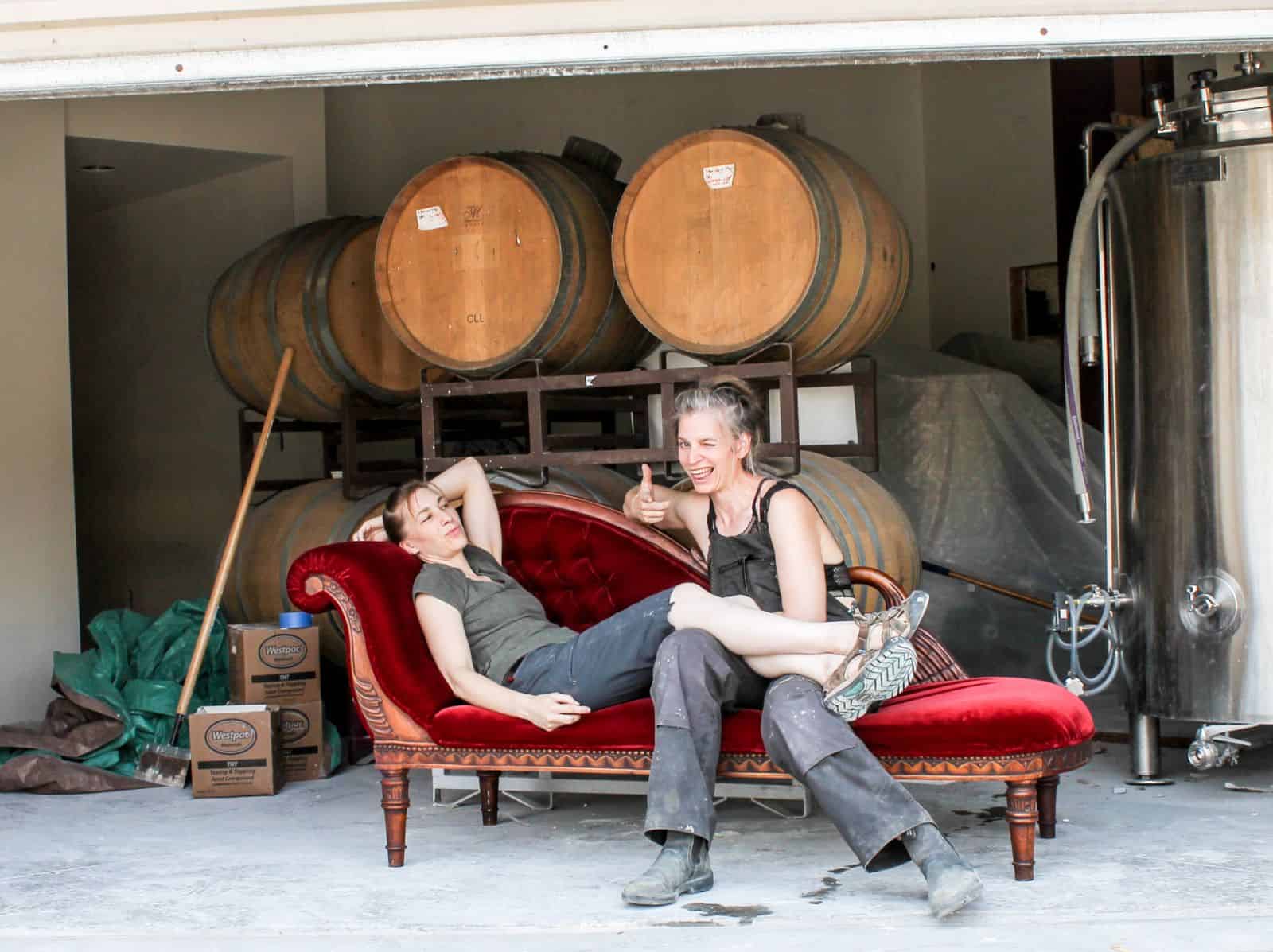 Theirs is a love story: It starts with falling for each other, and then finding a new shared love for cider and apples. They met in 2001 as students studying on the Training Ship Golden Bear, and over the past nearly 20 years, have gone on to adventure into the territories of cider making and small business. Using locally sourced heirloom fruit, they make quirky, elegant ciders, like Mawage, a cyser that blends cider and orange blossom honey, Bearded Queen, an aromatic hopped cider, and Frost, an iced cider. 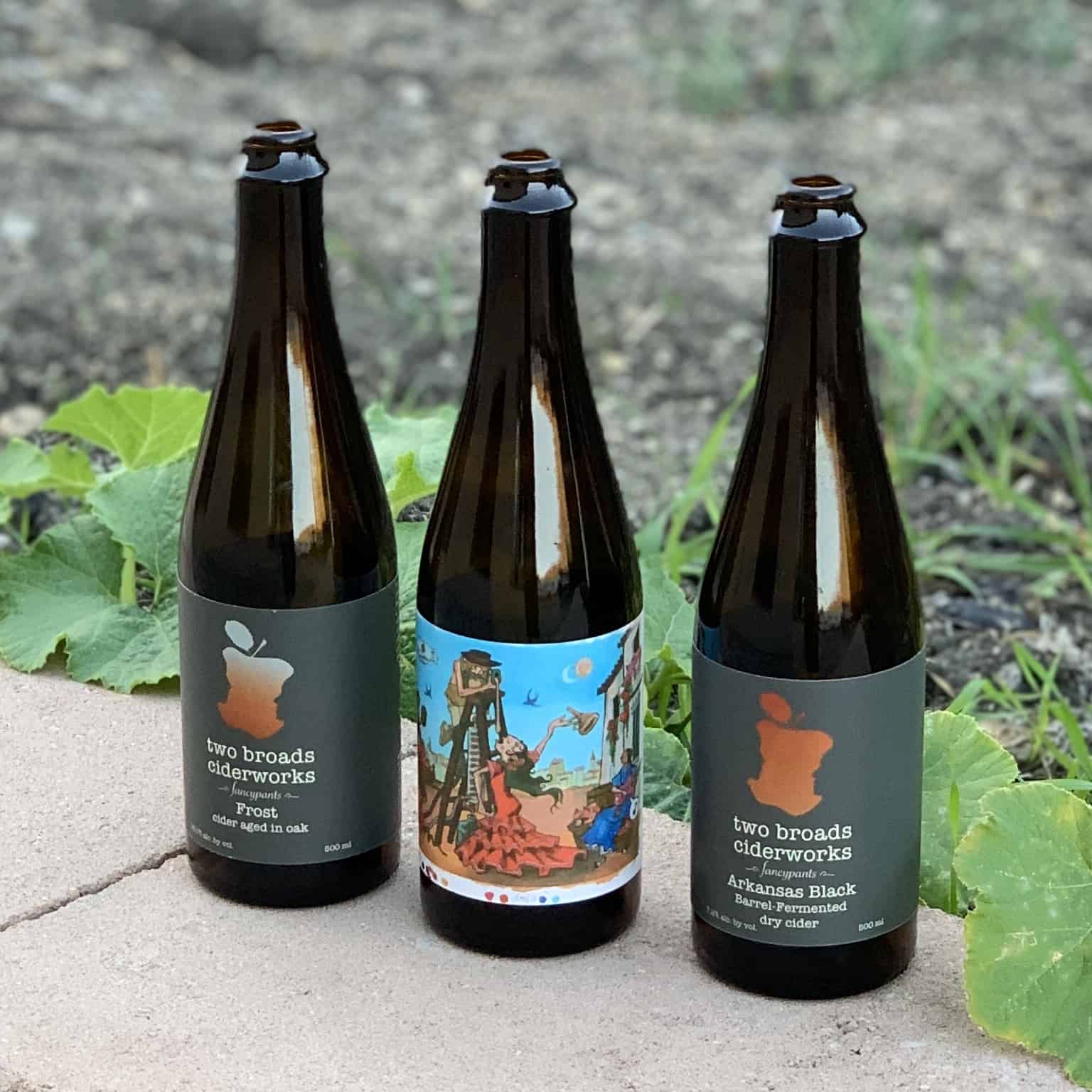 We caught up with these two to dig deeper into their story and learn more about the tasting room they’re building out in SLO, which will hopefully be open in 2022.

Cider Culture: Lots of people enjoy cider … what inspired you to turn that enjoyment into making cider?

Morgan Murphy: I was into home-brewing beer back when we first met. Though I was primarily a brewer, every fall we’d make cider. We travelled to Spain and France in 2003 and 2004 because flights were super-cheap. We were exposed to Spanish and French cider and realized there was a lot more exciting stuff happening there versus the macro cider, sweetened stuff [in the US].

Maggie Przybylski: Morgan and I would go every fall to this small orchard in this little microclimate area in San Luis Obispo county called See Canyon. There were orchards there with all these heirloom apples that we’d never heard of, we’d buy 5-gallon gallons of juice to ferment.

Morgan: For awhile, we wanted to start a brewery, but we realized that there are enough breweries. As we got older, we didn’t drink as much beer and started enjoying wine and cider more. Where we live is a big agricultural area, and there are tons of wineries and a few apple orchards, we thought doing something with the local producers of apples would be more interesting and fun for us.

Can you talk about actually starting Two Broads? What were those first few years like? What were some early challenges?

Morgan: About 10 years ago we were like, “Let’s start making this plan.” We’d look at equipment sales and collect things in the garage, fermenters and things. Five years ago we incorporated and it was like, “It’s time to start looking for a space.” It took a long time to find a space that was the right size with the right zoning and a landlord who wanted us. We found it about mid-way between downtown and the airport. SLO is pretty small, so there’s basically a college and the downtown, but we were looking for a smaller cheap warehouse where we could produce cider and do wholesale. 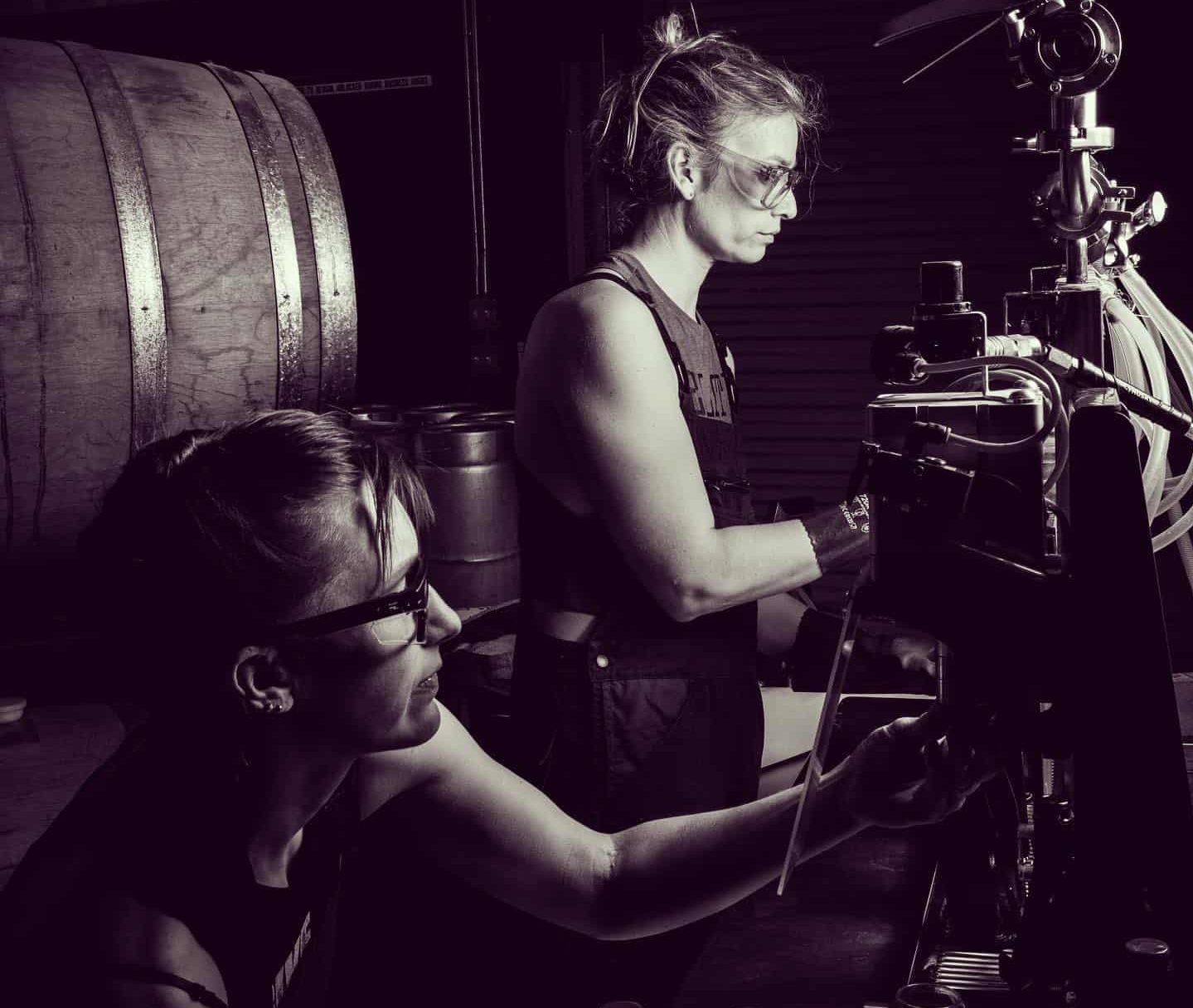 Did your career backgrounds help you as you started making cider plans?

Maggie: I was a wildlife biologist, but eight years ago I quit that my job to work at a restaurant. I wanted to learn what it would take to be in hospitality and run that kind of business. One of the first places where I applied hired me with no experience and I learned a lot! I actually just quit that job this October to go full time with Two Broads. I learned a lot and made great connections at that restaurant, and I’ll miss the little family we created there, but in order to get our tasting room open soon, we need to focus on it.

When you moved into your current production space from your home garage, how did that change how you made cider?

Morgan: Space for barrel-aging is huge. And being able to grind and press apples — originally we were doing it by lifting buckets, and eventually we got this bin dumper thing which is just an amazing piece of hydraulic equipment. We’re still pretty hands-on, though. There are a few more things to automate, which is fun for me as an engineer, honing the process to make it a little more sane.

Maggie: Morgan likes to build things. We like to have our hands in every part of what we’re doing. 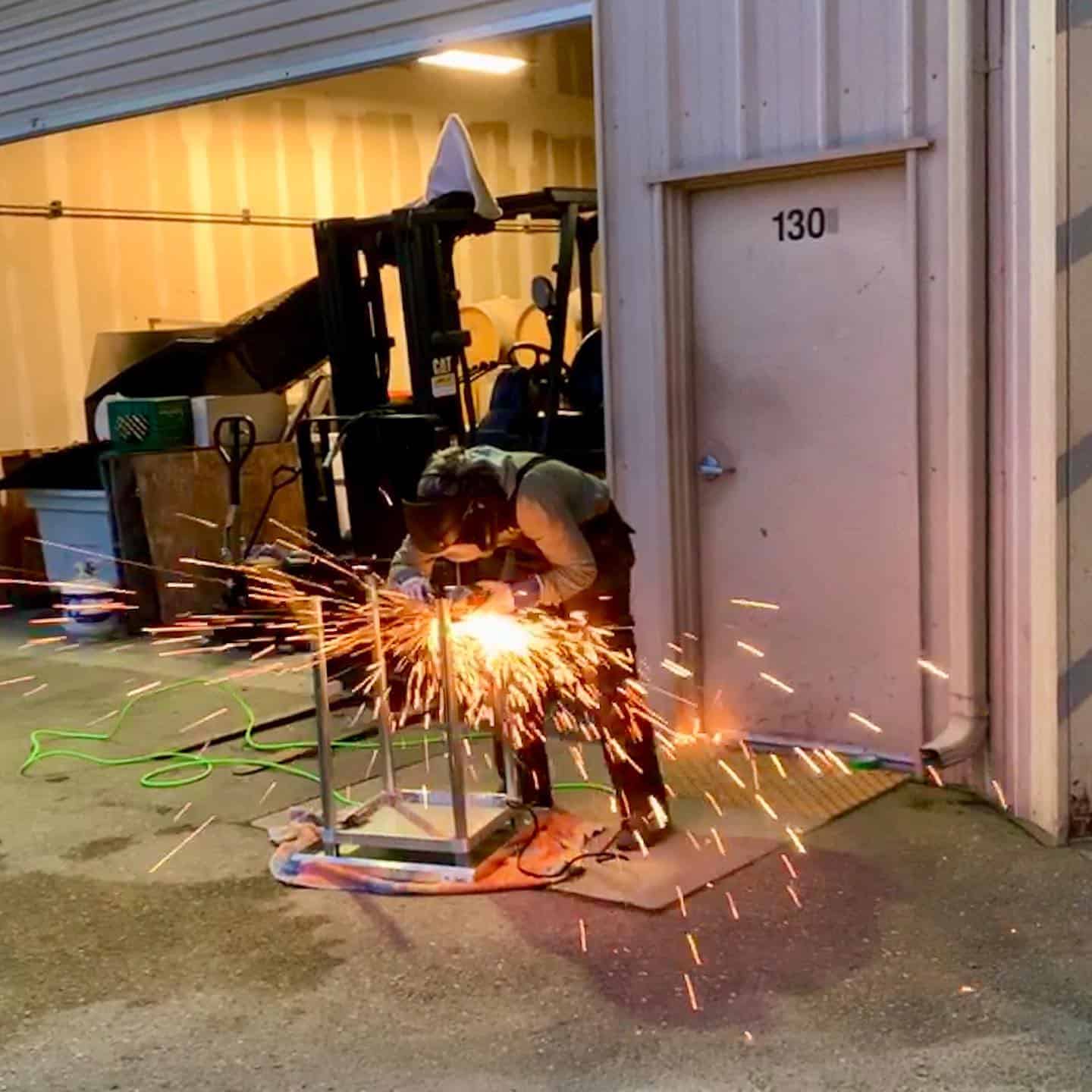 Morgan: Even if it may not be the smartest thing. Sometimes it’s just quicker to buy things. Like a keg washer is something you think you might not need, but then you realize you need it.

Maggie: The joy comes from making and using something, but it costs time. That time can be pretty precious.

How have things grown or changed for Two Broads Ciderworks from your start in 2015 to today?

Maggie: Production is in the same warehouse that we found in 2016. In 2017 we started producing there in very small batches. We expanded into the neighboring bay for storage and we also let some drag queens use it as a practice space for Rocky Horror.

Morgan: We’re still making under 10,000 liters a year. Our sales have grown year over year, and we’re sort of focused more on a high-quality product that’s locally focused. We’re not trying to just sell as many units out the door as possible. So it’s slow growth, but definitely growth. 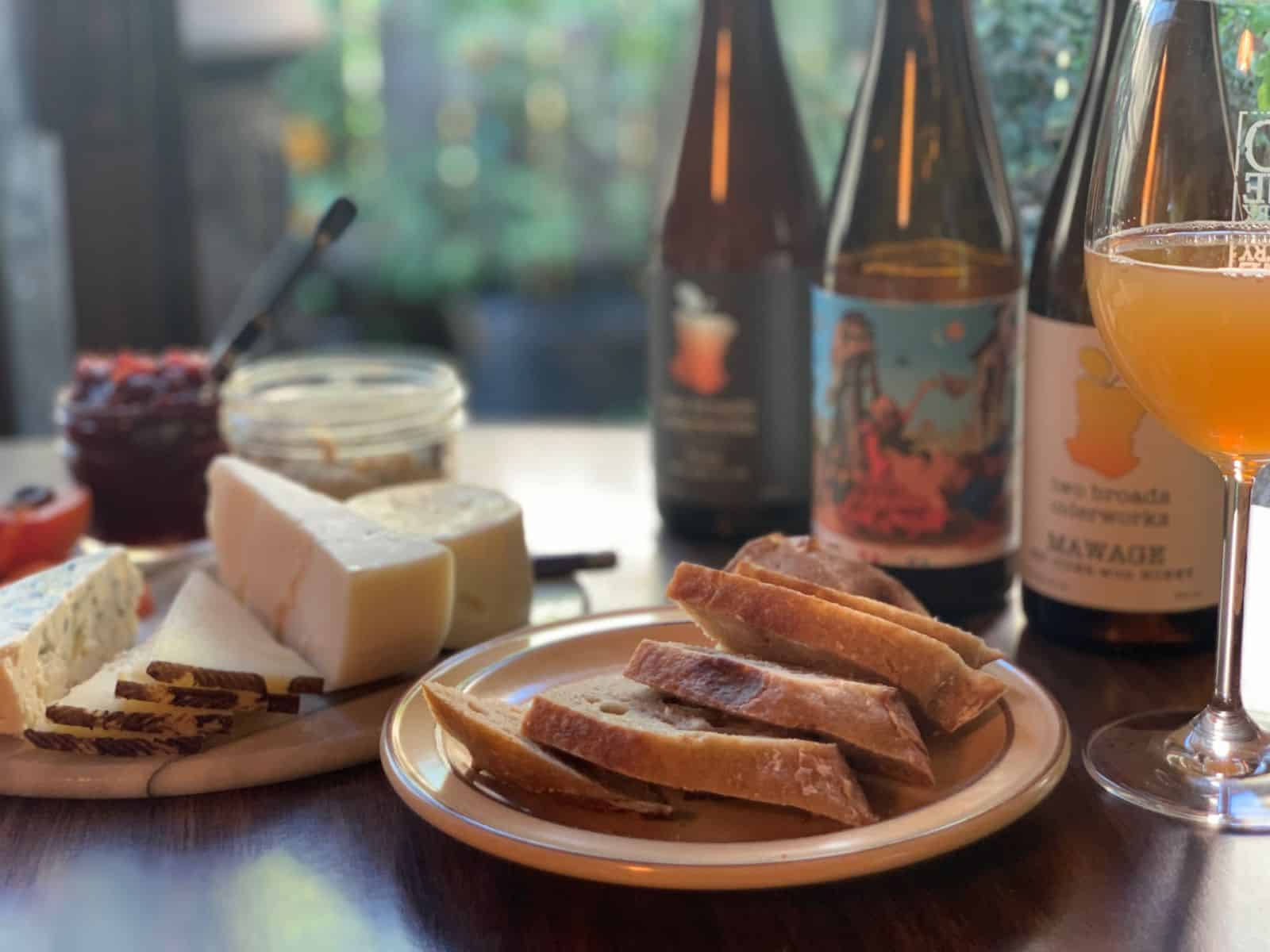 Was a tasting room always part of your plan?

Maggie: We wanted a tasting room from the get-go, so that we could have different batches of different ciders and showcase them. We pulled the permits in January of 2020, and then COVID hit. We hoped to have it open in June, but we’re still limping through the process, which has been painful.

Maggie: Our tasting room will have a Bohemian Victorian aesthetic.

Morgan: A guiding principal is … we’ve been to overly-modern-industrial aesthetic breweries and man caves where you can’t hear yourself think or talk to the person next to you because it’s so echoey. We’re trying to make our space cozier and more interesting. We’ll have rugs and sound-absorbing panels on the ceiling. We’ll showcase local art and queer art. So you’ll come into this nondescript warehouse parking lot and when you open the door and it’s kind of a different world. We also have a patio with a seasonal creek and really nice outside ambiance. 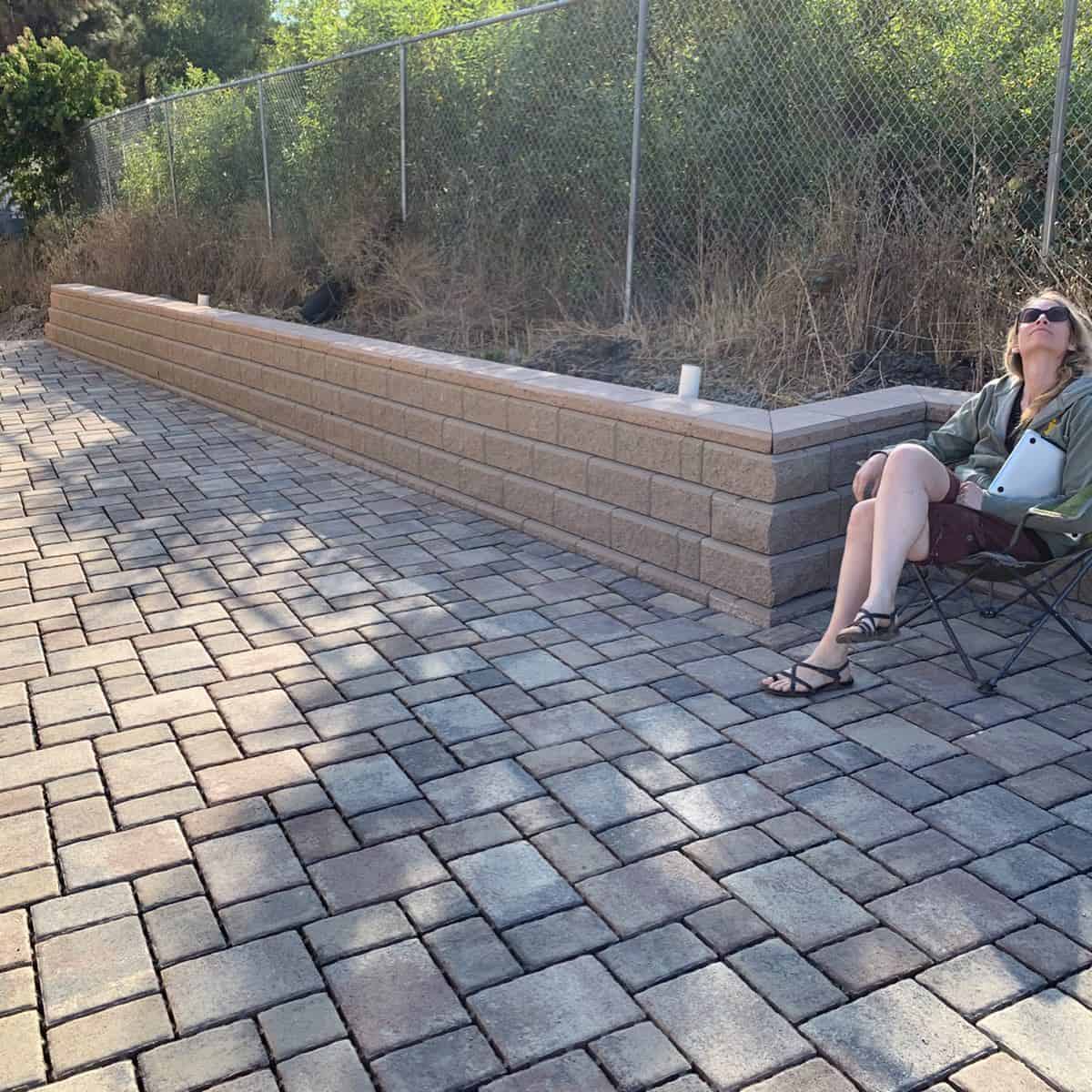 Where does Two Broads source fruit from?

Maggie: We get a lot of fruit from SLO Creek Farm, just outside of town, from Fair Hill Farm up north in Paso Robles. Some private orchards have offered to give us apples, too. We try to get fruit from between two counties unless it’s really special apples and then it’s usually a small purchase from Washington or Oregon. While it’s mostly dessert fruit in our area, we do get some interesting varieties, like Arkansas Black and crab apples but in small quantities. 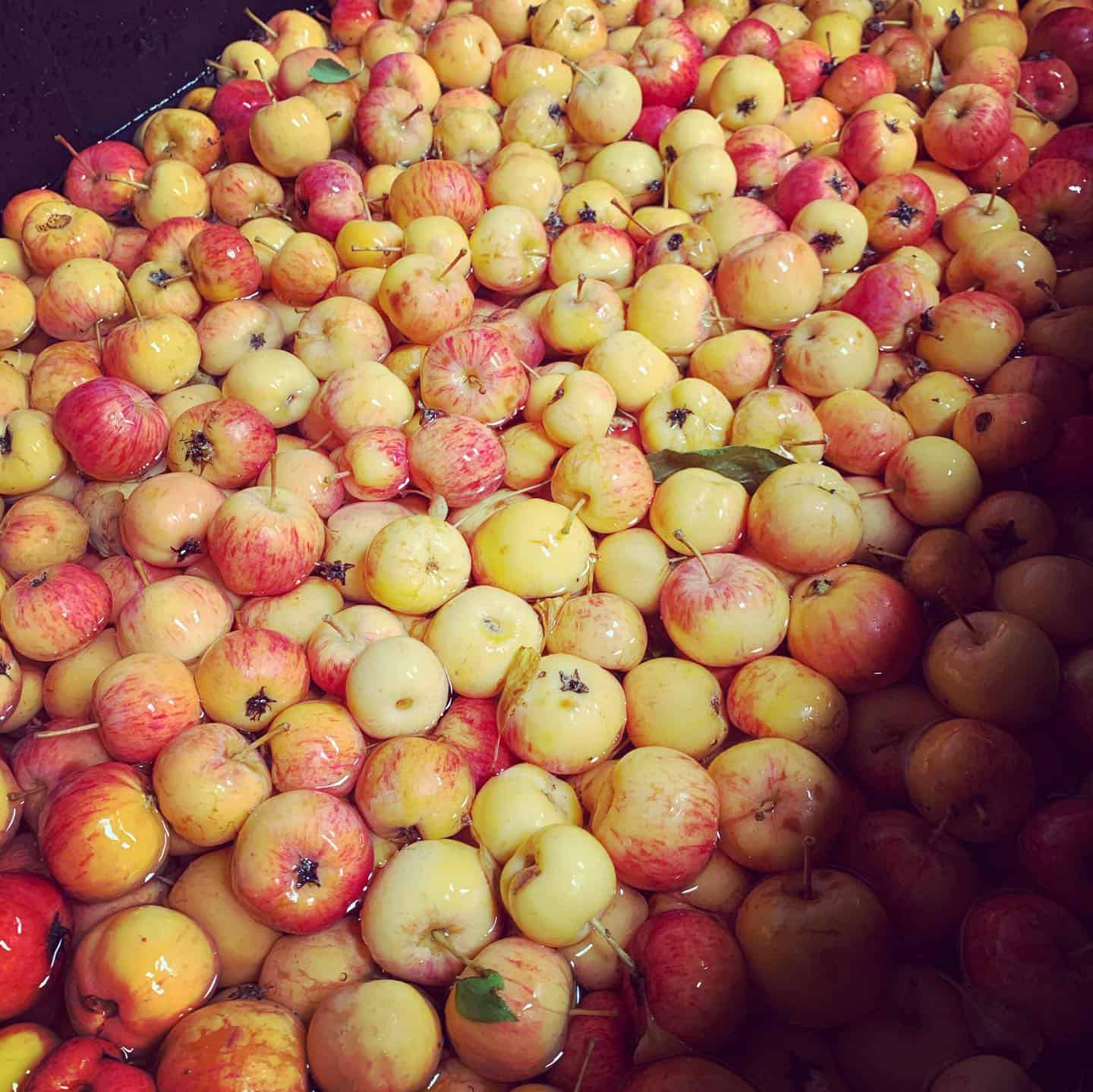 Are there any ciders you’ve made that surprised you, or that you’re especially proud of?

Maggie: Some batches surprised us. We didn’t expect Gala apples to deliver a gorgeous single varietal cider. Bearded Queen — we’re pretty proud of our names — is a dry hopped cider and it comes to you like a Sauv Blanc, it’s really fresh and tart with a passionfruit and grapefruit nose. I seem to be the fruit cider person, so I’ve been experimenting with a lot of bottle conditioning, that’s been really fun for me lately.

Morgan: I tend to like the barrel-aged stuff. We age that in French oak, and we’ve started dabbling with ice cider that I’m really proud of. The first time with ice cider did not go as planned. It started off okay, but our cooling unit went offline for two days and then temperature of the fermentation got warmer than it should’ve been. So the cider got dryer than an ice cider should get. It came out still sweet, with that huge aroma and flavor and acidity and it’s still pretty balanced. We have to warn people that it’s 16% because they’ll drink way too much of it.

Is it just the two of you working at the cidery right now?

Maggie: We have a few people who come help on pressing day. I think it’s good that COVID is slowing down the tasting room opening and the amount of people that are coming in. When it does open, we will be expanding the team. People are already sending in their resumes! 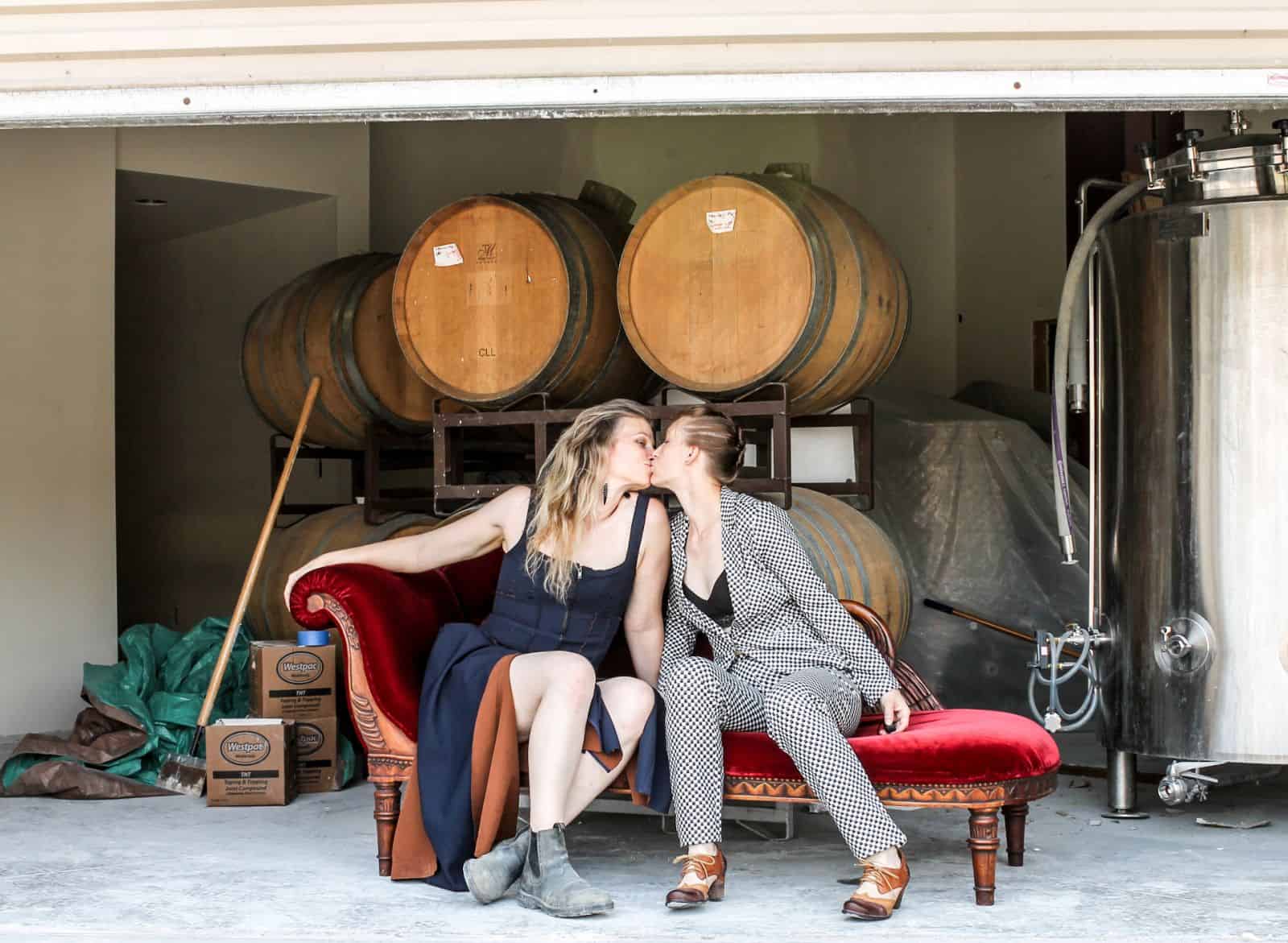 What are your favorite things about working with each other?

Morgan: I’m very good at having big ideas and starting projects, and Maggie is very good at actually finishing projects. It’s a good mix. She’s good at keeping deadlines and organizing, and I tend to be better at process stuff in terms of fermentation and research. She’s also a lot friendlier than I am.

Maggie: I’m very good at cracking the whip as well. I may not have large ideas, but I have small ideas, and I have follow-through. We balance each other out, she’s pretty quiet and I’m definitely the extrovert.

Let’s talk about the name. How did you land on ‘Two Broads’ for your cidery?

Maggie: We toyed with a few names, like animal names like Cellar Cat, or SLO Cider (which is actually a company now). People just responded to Two Broads. I was just a little worried that some men, especially older men, are like, “Can I call you that?” The word has this history of being this misogynist word for women, but it seems like it’s being reclaimed. Most of the women we talked to loved the name. So we went with it. It tells you a little bit more about us, like we’re two women running this business and we’re not perfect ladies.

Two Broads Ciderworks ciders are available for purchase online for shipping in California, Washington and Oregon, with free pick-up and delivery in SLO county. To keep up with the tasting room progress and news on a grand opening, follow Two Broads on Instagram and Facebook!