5 Ciders That Have Us Stoked on 2019 Cider Week Virginia

Virginia is for cider lovers! This is true all year long, but especially during Cider Week Virginia, which takes place in Old Dominion this year, from November 15 to the 24 all across the Commonwealth. With 16 regional farm-made and craft cider makers featured in events in VA, there are so many awesome ways to celebrate the local cider culture.

Even though Cider Week Virginia is still a few months away, we’ve rounded up five Virginia-made ciders that have us excited for all that awaits during this annual celebration! 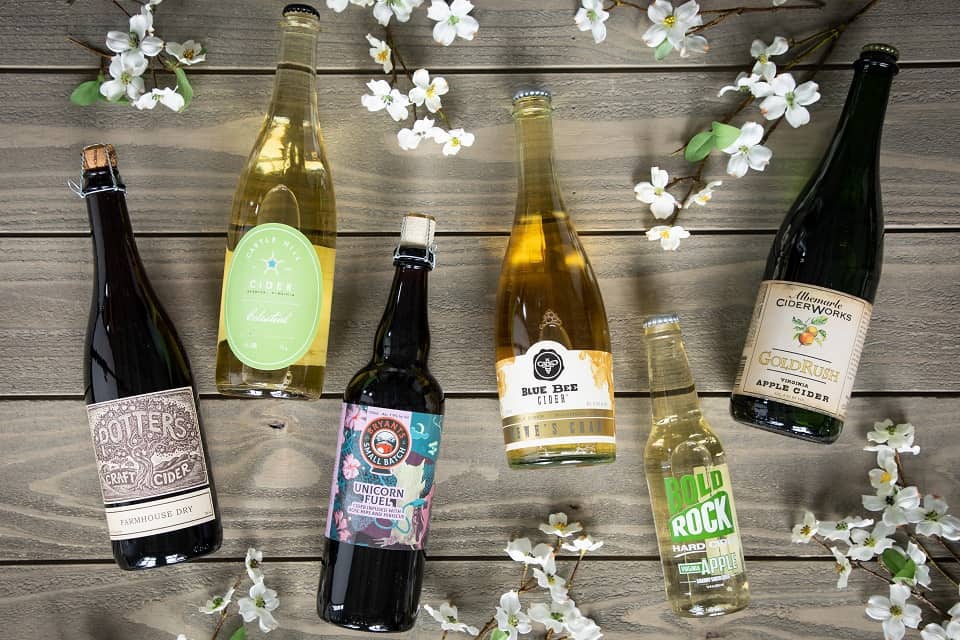 Albemarle CiderWorks, which was founded in 2009, is an offshoot of Vintage Virginia Apples, an orchard in North Garden, VA that specializes in rare, obscure and heirloom tree fruits. Among more than 200 different cultivars of apples, are both heirloom and more recent varieties. Using this fruit, Albemarle CiderWorks crafts hyper-regional, single-varietal ciders that are complex and beautiful.

GoldRush is its fourth single-varietal cider, made with a recent American apple from Purdue University, named for its color and the rush of flavor it offers. At 10% ABV with a rich, complex flavor, tart acidity and balanced, spicy sweetness, this cider nearly treads into wine territory. Elegantly dry, GoldRush is a great food cider (pairing suggestions include chicken cordon bleu, trout, and firm, nutty cheeses, like Gruyere and Manchego), or it’s lovely all on its own. 2545 Rural Ridge Lane, North Garden, VA; (434) 297-2326.

This truly stunning cidery (weddings are not uncommon here), located in Keswick, VA, was founded in 2011 on a 600-acre property belonging to the Castle Hill estate, which was built in 1764 and has hosted seven U.S. presidents and other important people throughout history. Castle Hill‘s ciders express the best of local orchards, each packaged in elegant bottles.

Celestial combines aromatics of fruit, flowers and spices over a foundation of supple tannins. The cider is a blend of bittersweet cider varieties, like Dabinett and heirloom apples (Albemarle Pippin, Winesap and Grimes Golden), for bright acidity and a clean, refreshed palate. Pairing suggestions include Asian dishes and ripened cheeses. 6065 Turkey Sag Rd., Keswick, VA; (434) 296-0047.

Hewe’s Crab is one of its small batch offerings, which seek to put even more exciting stuff in front of local cider fans.  A rare apple breed, at one time this wee crab apple was nearly extinct, but it’s been making a comeback, thanks in part to cider makers like Blue Bee who seek out lesser known native apple varieties. This bright, floral cider clocks in at 8.5% ABV and offers notes of cumin and honey. 1320 Summit Ave., Richmond, VA; (804) 231-0280.

Potter’s Craft‘s story begins with two friends, Tim Edmond and Dan Potter, meeting at Princeton University. They bonded over lots of shared interests, particularly homebrewing beer. After a number of years of friendship and joint ventures (full story here), they began experimenting with hard cider in 2009. They founded Potter’s Craft a few miles outside of Charlottesville, VA in 2011, and they planted their first orchard in 2012. Guided by a shared love of experimentation and local apples, the duo is making consistently fresh, tasty ciders year-round, in both cans and large-format bottles.

Farmhouse Dry is a uniquely refreshing cider (no residual sugars to stand in the way of a crisp, tart, dry profile). It pours a pale gold, with lovely effervescence and aromas of peach and melon. Food pairings include pork, duck, wild game and aged cheeses. Potter’s Craft Cider Garden: 209 Monticello Rd., Charlottesville, VA; (434) 964-0271.

Bold Rock Hard Cider is another Virginia cidery founded on friendship. In 2012, John Washburn, a farm owner, contacted Brian Shanks, an award-winning New Zealand cider maker, to inquire about making cider. The two joined forces and built their first cider barn at the foot of the Blue Ridge Mountains in Nellysford, VA. Using local apples, they crafted Bold Rock’s first cider, which was the Granny Smith-style.

Today, this remains one of the brand’s flagship ciders. Starting with an expertly crafted blend of Virginia apples, the crisp, tart green apple flavor is unmistakable, with lively acidity and sparkling effervescence. Multiple locations.

Bryant’s Small Batch Cider operates on a sixth-generation family farm, which includes a tasting room in a barn that dates back to the 1800s! Its small batch ciders are 100% sugar-free (fermented totally dry), naturally carbonated and made with apples grown right on its farm. Extracts, artificial flavors and bulk juice are never used, and all of its ciders are fermented low and slow.

Among its lineup of ciders is Unicorn Fuel, a rosé style brut cider, made with rose hips and hibiscus. Unlike some pink ciders, this one is fully dry, with a nice balance between smooth and sour. It pours a pretty pink color that belies its boozy touch – at 7.9% ABV, this cider is heftier than it tastes! 3224 East Branch Loop, Roseland, Virginia; (804) 420-9683.