Something is afoot in the craft cider world, and it’s got us all aflutter. Lately, we’ve been seeing a number of cider makers, brewers and winemakers creating beverages that push and expand the boundaries of what we typically expect from cider, beer and wine. By melding the divisions between these usually separated categories, these innovators are giving birth to hybrids that offer wild new taste experiences. The outcomes of these co-fermentations and blends are experimental and a little bit futuristic, as if makers are starting to snip their tethers to convention and ask more freely: What happens if we just try?

Here are five hybrids we’ve got our eyes on:

"No Love Lost" 2017 Krista foraged wild apples and macerated them for two weeks prior to pressing. The fermenting cider was then blended with Frontenac Noir juice and skins (Must). Fermented in demijohn. Native yeast fermentation. No sulfur additions, fining, filtering, or funny business in the winery, just fucking fermented juice. The wine was bottled to finish under cap as ancestral method. We will be adding what is left of this “No Love Lost” juice to the menu tomorrow and it will be available by the glass starting tomorrow Thursday 4pm-10pm and avail by the glass every Thur – Sat 4pm-10pm until its gone. 266 Pine Street Burlington Vermont #cocellars #zafawines #vintage2017

CO Cellars is a new project from Shacksbury and ZAFA Wines in Burlington, Vermont: It’s both a tasting room in the Soda Plant, and a collaborative effort focused on co-fermentations. The duo released their first “CO”-llaboration when the taproom opened in late November of 2018, a kegged condition co-ferment of three grape varietals and a cider base. ZAFA’s founder Krista Scruggs has been fermenting grapes and foraged apples together for awhile now, and we’re so excited to see what is possible now that she’s teamed up with the cider masters at Shacksbury.

When two beloved drinks meet, you know it's going to be a match made in beverage heaven. Keep your eyes peeled for our Pinot Noir Cider in tall cans at the LCBO! #shinyapplecider #pinotnoir #winenot #siplocal #craftcider #ciderlove #ontariocider

This Canadian company makes its line of modern ciders with fresh-pressed Ontario apples. It stands to reason that it would play around with the combination of apples and grapes — Shiny Apple Cider‘s sister company is Small Talk Vineyards, a small vineyard in Niagra-on-the-Lake. The Apples & Pinot Noir cans are a blend of 10% pinot noir and 90% apple cider, and weigh in at 6.5% ABV. 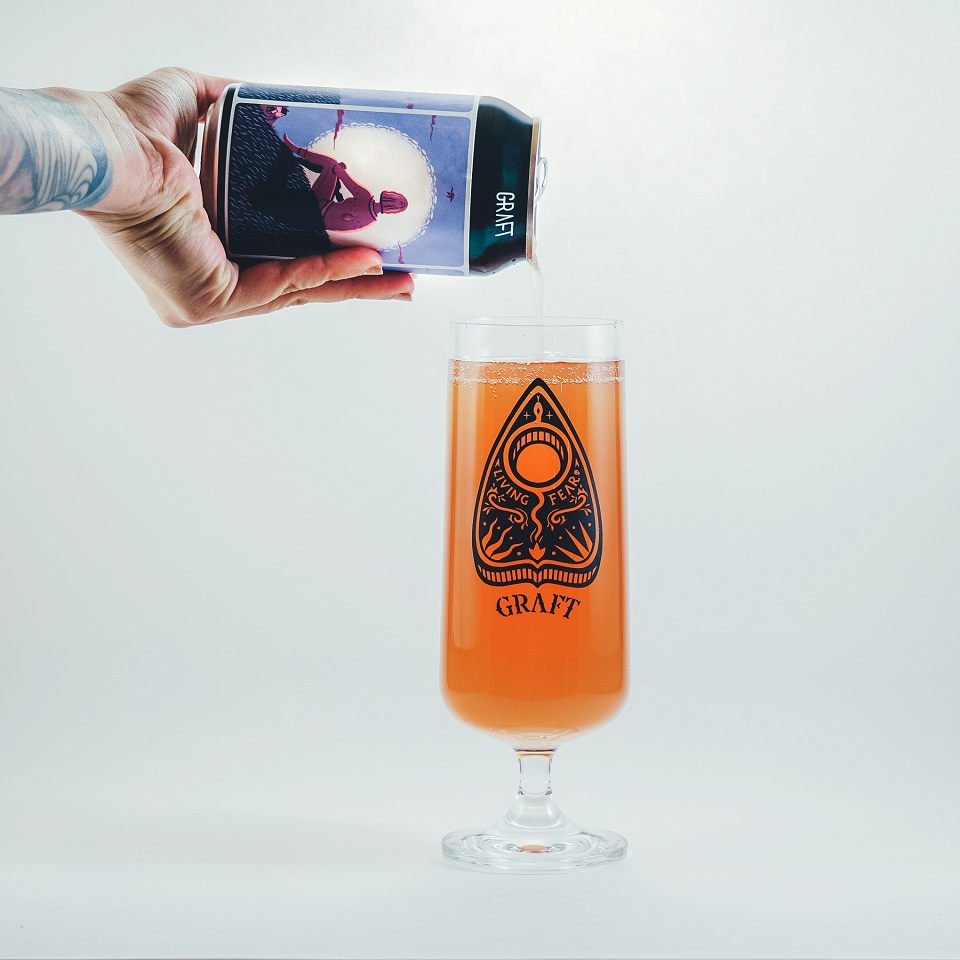 Graft Cider‘s Worlds Apart is the first of a two-part collaboration with Ontario-based Revel Cider Co., meant to challenge both modern and traditional cider making methods. This cider/wine hybrid encompasses both brands’ passions for wild-ferments and for bridging the gap into these cross-categories.

Funky, but approachable, the white wine element adds full-bodied jammy and floral characteristics, with a touch of bright acidity.

“We worked with Brotherhood Winery [in Washingtonville, New York] to source the Gewürztraminer wine skins, then did a fresh apple juice fermentation (skin contact) in an open-vat for one week,” explains Graft co-owner, Sara Sherrer. “It was then aged in white wine barrels for several months before blending the barrels together.”

After years of tinkering and experimentation, we are incredibly excited to introduce our latest boundary pushing fermentation iniative to you: Frequency Illusion. . Born from a need to experiment with pretty much every aspect of our brewing process, this iniative will present new processes, co-fermentations, and far out psychedelic results (hopefully!) season after season. These liquids are tough to define, but I’ll try my best!.. . Frequency Illusion; Riesling. Brewed in July of 2017. Co-fermented in stainless steel with our Magickal Saison yeast with fresh Riesling juice from the 2017 harvest. Bottled in January of 2018. This Frequency Illusion is comprised of 51% Saison and 49% Riesling juice and is showing complex notes of juicy Asian pear, fresh cracked black pepper, under ripe peach, and fresh hay. 8.6% abv. $20/750ml bottle. . Frequency Illusion; Heirloom Cider. Pressed from an assortment of heirloom apples from the 2017 harvest. Minimally processed and fermented with a blend of House microflora. Bottled in December of 2017. This Frequency Illusion is 100% apple cider and contains no malt-derived sugars. Effervescent and ephemeral. Slightly Brettanomyces forward with refreshing notes of fresh hay, ripe apples, semi-sweet Cava, and a Trappist-esque brett presence. 7.0% abv. $15/750ml bottle. . Frequency Illusion; Merlot. Brewed in March of 2017. Primary fermented in a large French oak foudre. Refermented with nearly two tons of fresh Pennsylvania grown Merlot grapes from the 2017 harvest. The Merlot grapes had been crushed and fermentation took place on the skins as well. Bottled in January of 2018. Like a sneaky pet-nat with wild leanings. This Frequency Illusion shows beautiful notes of Italian plum, green strawberry, damp hay, tart pie cherries, and just a touch of earl grey tea. 6.4% abv. $20/750ml bottle. . . All three Frequency Illusion bottles are available beginning TODAY at our @tiredhandsgeneralstore! . We recommend aging these bottles on their side in a cool/dark place and gently rousing the sediment back into solution prior to opening. ALSO! You will need to have a corkscrew handy to dig into these little freaky beauties. #dreamillusion

A post shared by Tired Hands Brewing Company (@tiredhandsbrewing) on Apr 6, 2018 at 8:36am PDT

In the spring of 2018, Pennsylvania’s Tired Hands Brewing Company — always a good brewery to look to for boundary-smashing — launched its Frequency Illusion series. These rotating bottles combine elements of beer, wine and cider. The first trio that it released included an Heirloom Cider (that sold out very quickly, but we have the good word that it will be back in the rotation soon enough). This 100% apple cider was made from an assortment of heirloom apples from the 2017 harvest, which were minimally processed and fermented with a blend of Tired Hand’s house microflora. Tasting notes include: “slightly Brettanomyces-forward, with refreshing notes of fresh hay, ripe apples, semi-sweet Cava, and a Trappist-esque brett presence.” Other Frequency Illusion iterations include beer/wine hybrids that are mind- and taste-bud-bending (in a good way).

Graf — a beer/cider hybrid — isn’t brand-new to the world of craft beverages, but it’s a product we just don’t see very often out there in the world. Hawke’s, a U.K-based modern cidery (that reminds us a lot of Graft, to be honest) is trying to take the concept more mainstream with Graff, its co-fermented apple pale ale. A blend of Braeburn and Bramley apples are fermented with a caramelized and malty beer wort, to which American Ale and Sauvignon Blanc-style yeasts are added. It’s then hopped with Amarillo and Cascade. Curious about the flavor? Hawke’s reports these tasting notes: “The blend of hops gently opens the nose to the aroma of crusty bread. Combining the maltiness of grains with the sharpness of fruit, it delivers an intense mouthfeel evoking memories of continental beer, against the subtle sweetness of pure apple juice.”