The New Year is as good a time as any to get out of your routines (read: ruts) and explore more of what the world has to offer. Even if you’re not the resolutions type, we’ll bet you’re feeling, at least, a tiny itch for something new. Why not shake up your cider preferences and try a new producer, a new style, or just something fun and unexpected to help keep you cozy through the first whole month of winter?

A post shared by Minneapolis Cider Company (@minneapoliscider) on Jan 6, 2020 at 5:24am PST

“The brain has a hard time distinguishing fruity from sweet. Many ciders with absolutely no sugar in them can still be fruit-forward,” explains the association’s executive director, Michelle McGrath. “You’ll find there are a multitude of dry ciders available when you start seeking them.”

You can check the ACA’s website for a frequently-updated list of no-sugar ciders, and follow along on social media with the hashtags #dryciderjanuary and #pickdrycider. One dry cider that we’re excited about is Minneapolis Cider Co.’s Brut, bone-dry with Champagne vibes and notes of pear and melon. Look for it on draft and in 4-packs, or head to the cider’s tasting room for a round or two and a rousing match of pickleball (yes, really). 701 SE 9th St., Minneapolis, MO; (612) 886-1357 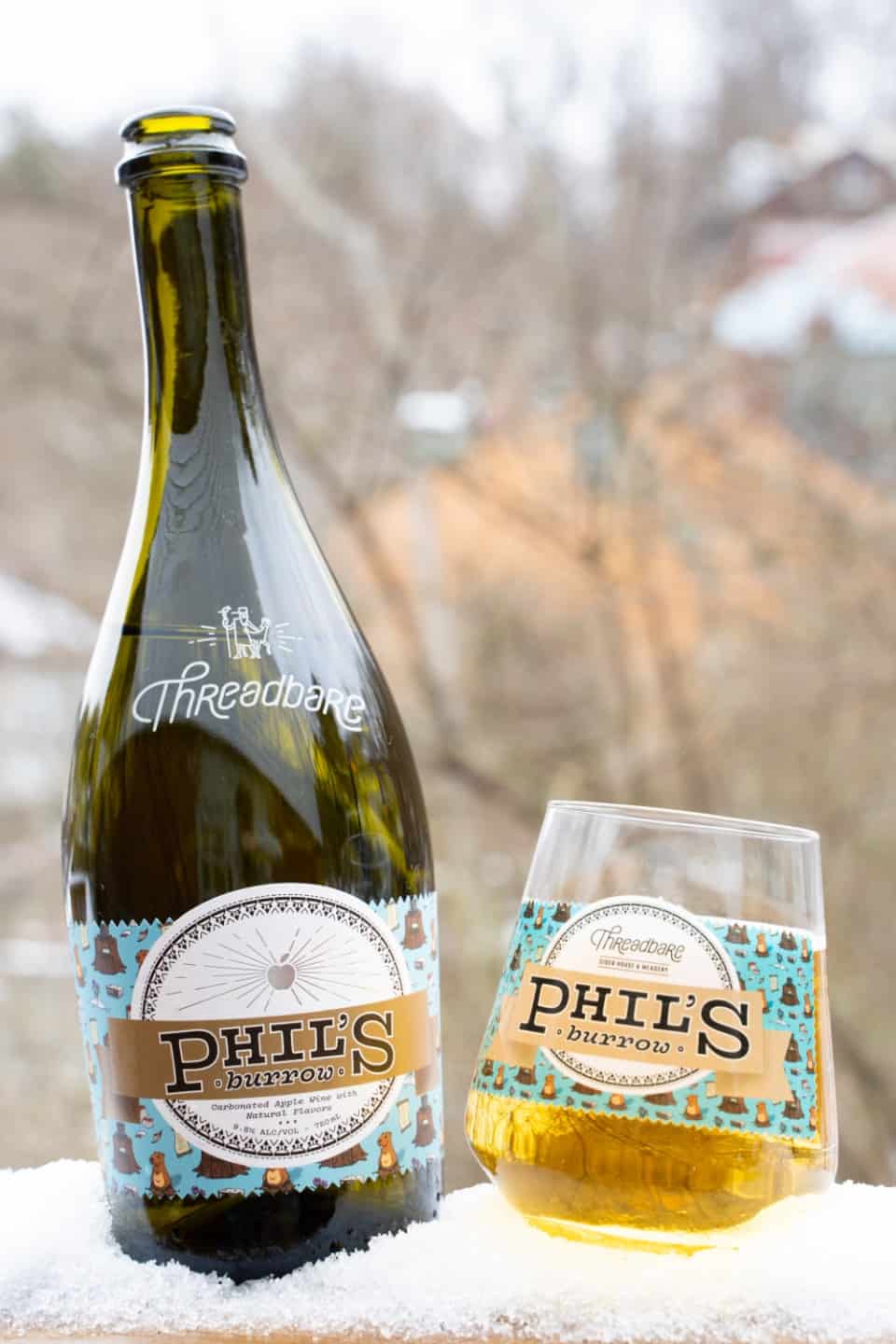 Pittsburgh’s Threadbare Cider is all set to celebrate one of Pennsylvania’s highest-profile annual events: Groundhog Day. This Feb. 2 holiday, which takes place in Punxsutawney, PA (about 85 miles northeast of Pittsburgh) is lauded by the cidery with Phil’s Burrow, a modern spin on a Rum Raisin cider. Threadbare starts with Jonagold, Rome, Golden Delicious and Macintosh apples which are fermented with a Sauvignon Blanc yeast culture after pressing. The cider is then transferred to small cask rum barrels from Wigle Whiskey, aged for a month, and then macerated for three days with 60 pounds of chopped raisins and three pounds of ground cinnamon. The cider is then bottled and carbonated, and the result is a semi-sweet 9.8% ABV cider with notes of vanilla, rum, marzipan, nutmeg and orange zest. The cider is officially released on Saturday, January 18, but you can pre-order on Threadbare’s website. 1291 Spring Garden Ave., Pittsburgh, PA; (412) 322-5100

Our first release for 2020: Salut, our collaboration with @cidersummit! In the cider world, every year begins with the Cider Summit series of cider tasting festivals where we meet with cider friends old and new and toast to each other. Salut is dry, crisp and effervescent with a touch of French oak. Perfect for celebratory toasts, and available in 500ml bottles at our Bottle Shop to start, and select markets in early 2020.⁠ 6.7% ABV.⁠⠀ ⁠⠀ We're open from 1-6:30pm tonight, so you can get the jump on this new cider. We are closed New Year's Eve and New Year's Day. Plenty of ciders to choose from, only one chance to bring in the New Year with style. Come visit us!⁠⠀ ⁠⠀ #pickcider #cidersummit #newyear #ciderforthenewyear

Virtue Cider‘s first small-batch release of the new year is Salut, a collaboration with Cider Summit, a series of cider festivals that take place in US cities. For the team at Virtue, this is where they “meet with cider friends, old and new, and toast to each other.” To capture that spirit, Salut is dry, crisp and effervescent with a hint of French oak, coming in at⁠ 6.7% ABV. Even though New Year’s Eve has passed, we’re sure you still have plenty of things to toast, and Salut, as its name implies, is the perfect thing for your toasting glass! It’s available in Virtue’s Bottle Shop, and is hitting a wider market in January 2020. 2170 62nd St., Fennville, MI; (269) 722-3232

🔺️NEW CANS COMING SOON!🔺️ 🔴ROJO 100% Wenatchee, WA @snowdriftciderco-grown red-fleshed apple blend in can for the first time! The can is a zoomed-in cross section of an Otterson apple photographed by the amazing @pomme_queen. ⚫TIME & PLACE: GLAIZE ORCHARDS 2018 the first cider in our new single-orchard series consisting of 3rd leaf bittersweets grown by @glaizeapples in 2018 in Winchester, VA! MORE INFO TBA

Anxo Cider‘s Fall 2019 new release, Rojo, feels just as fresh in 2020. This beautiful dry cider is made with a blend of red-fleshed apples from Snowdrift Cider Co.‘s Red Love Breeding Program in a town called Wenatchee in Washington state. The juice was fermented in stainless with Rhone Valley rosé wine yeast, for a 6.9% sipper that’s hazy and tart with kickin’ acid. We love how the can art is a super-close-up of a photograph taken by apple photographer William Mullan, AKA @PommeQueen. This was a limited-release cider, but it’s still around! 300 Florida Ave. NW, Washington, DC; (202) 986-3795; 711 Kennedy St. NW, Washington, DC; (202) 722-2696. 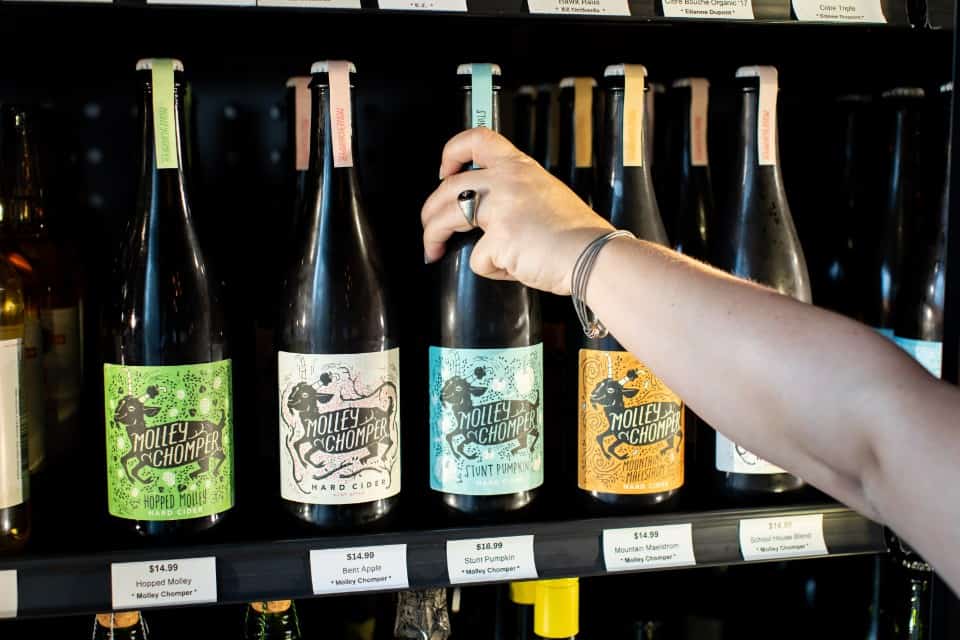 Molley Chomper, based out of Lansing, North Carolina, makes a range of fresh, fun hard ciders from heirloom dessert and heritage apples sourced from small orchards in the high country of North Carolina and Virginia. Mountain Maelstrom (which sounds like a scenario one might encounter this winter) is a blend of 30 varieties of late-season apples, including Golden Delicious, Virginia Beauty, Rome Beauty, Limberwigs and wild crab apples from small orchards in Ashe and Watauga counties in North Carolina. The 6.6% ABV cider is straw-colored cider with balanced sweetness, lovely acidity and a little tannic bite. Find Molley Chomper ciders at a number of locations in North Carolina, or shop online. 165 Piney Creek Rd., Lansing, NC; (336) 488-0809

embracing the northeast uniform with FEELS LIKE HOME. fermented on rum-soaked oak chips and blended with fresh juice, this fruity and unfiltered cider is back just in time for the holidays. hoping yours are happy, healthy, and flannel-filled 🎁

Let’s face it: January is a pretty homebound month. Make the most of staying in with Feels Like Home from Artifact Cider Project — there’s a pretty good chance the buffalo-checked cans match with the flannel shirt you’re wearing right now! Unfiltered with plenty of fruit character, a blend of Cortland, Golden Delicious, Crispin and McIntosh apples are fermented on rum-soaked oak chips and blended with fresh juice, for a balanced and smooth 5.4% ABV cider that Artifact suggests pairing with late-night bonfires. We think a good book and a nice candle would do the trick nicely, too! Find it at Artifact’s taproom or at a number of retailers across New England. 34 N. Maple St., Suite 15, Florence, MA; (617) 544-3494.